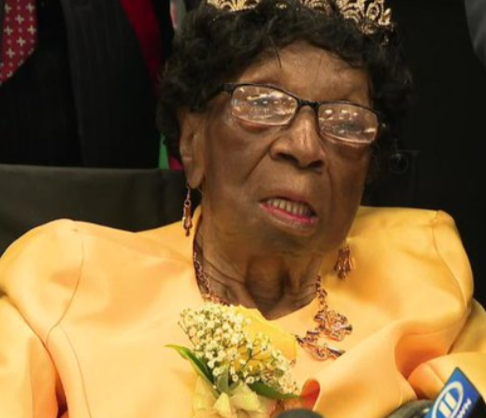 Alelia Murphy, a 114-year-old former seamstress who had been recognized as the oldest living American, has died.

Murphy, a New Yorker who was drawn to the city by the Harlem Renaissance, died a few days ago as confirmed by her granddaughter, Nefer Nekhet.

“It is with great sadness that we share news of the passing of Mrs. Alelia Murphy,” the health care workers’ union 1199SEIU, of which Murphy’s daughter was a member, said in a statement.

“Mrs. Murphy was the oldest living American, having celebrated her 114th birthday in July, surrounded by her family, friends, community leaders, and members of our AFRAM Caucus.”

The cause of Murphy’s death was not immediately available. Murphy was 114 years, 140 days when she died, the Gerontology Research Group verified.

With her passing, the group lists Hester Ford of North Carolina, who also was born in 1905, as the oldest living American. The world’s oldest person is Kane Tanaka of Japan at 116 years old, it says.

Twitter stories: Policewoman’s legs reportedly crushed after jumping on the bonnet of an erring driver who ran a red light and refused to stop