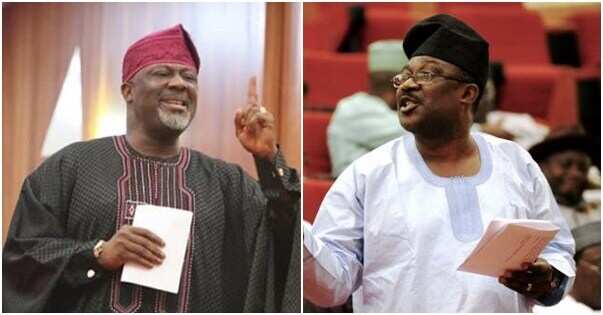 The former lawmaker who represented Kogi West senatorial district, Dino Melaye, has accused his successor of making moves to take over his contracts.

Melaye in a tweet on Thursday, December 12, alleged that Senator Smart Adeyemi wrote and visited all the ministeries and agencies were he has projects in the constituent.

Stating that Adeyemi was in SMEDAN on Wednesday, December 11, Dino said the new lawmaker was asking why his (Melaye’s) project of supply of computers to Titcom college Egbe be awarded to his company after procurement processes have been completed.

Melaye also warned that he will continue watching Adeyemi in all his move to outsmart him
Source: UGC

The former lawmaker also warned his successor about watch him saying; “Third eye watching all concern.”

Meanwhile, Legit.ng previously reported that Senator Adeyemi had listed a couple of changes since he was declared the winner of the Kogi West senatorial district.

Adeyemi said banks in Nigeria which giving loans to small business owners are part of the reason there is unemployment in Nigeria.

The senator said since becoming a lawmaker, even bank that had denied him favour are now willing to offer him loans after his election victory.