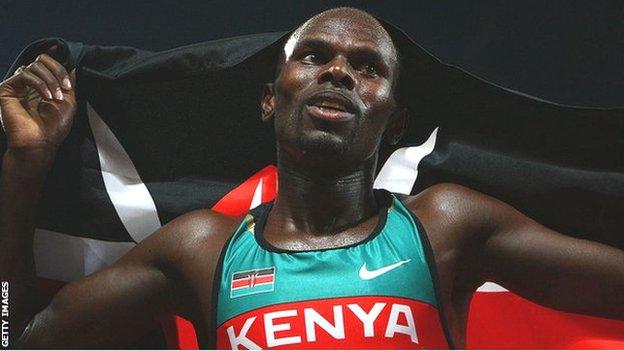 In 2012, Wilfred Bungei should have been celebrating a unique moment in his life.

His third child was due and it was going to be the first birth the world-famous 800m runner would be around for – but his battle with alcoholism stole that privilege from him.

The Kenyan’s stellar career, which started as a junior athlete in 1998 and climaxed when becoming the 2008 Olympic champion, had ended two years earlier, meaning he could now attend this special family moment.

It’s just he never made it – an athlete who had once conquered the world – now beaten by the demons of alcoholism that had ravaged his retirement.

While his third child was born without incident, Bungei has now come to view his own birthday – he is 39 now, having been born in 1980 – in an entirely different way.

On that day seven years ago, control itself was conspicuous by its absence.

He says he reached for the vodka bottle after fooling himself that to prepare to watch childbirth, he needed a drink.

“There was always that lie – ‘let me have one or two so that I can have the courage to see is what happening’,” he candidly recalls.

“I chose to have a shot of vodka but I ended up drinking over one litre in a short span of time. I don’t know what happened, but I do know I ended up in a ditch.”

“People actually thought I had died.”

Had the captain of Kenya’s 2008 Olympic team – who lit up Beijing’s Bird Nest with his stunning run that August, so defying pre-race expectations – died that day, he would have been the second Kenyan to do so in just two years.

In 2011, Kenya’s first Olympic marathon champion Sammy Wanjiru had died when falling from a balcony, with plenty of reports suggesting that alcohol played a role (even if the official autopsy proved inconclusive).

As with countless other sportsmen, Bungei had struggled to fill the void after his sporting highs had ended.

But what makes him stand out is that he is a Kenyan actually speaking out on the subject.

‘My kids were afraid’

There have been plenty of murmurings about a drinking culture within sections of Kenya’s athletics’ community, yet Bungei says that some of those affected are in denial about their problems.

“Some have refused to seek treatment because when it comes to alcoholism, going through rehabilitation is the only true way to heal and know who you are,” he explains.

Nonetheless, he is frank about how alcohol took hold of him – even recalling how his children and partner would fear being around him.

“The kids would always fear to be in the car with me because on several occasions you’d go to a bar and end up driving home,” says Bungei, who won silver at the 2001 World Championships, as well as bronze at the 2003 World Indoors.

“You have one too many and you are driving and the kids see what you are doing on the road – it was not safe.

“Once I was involved in an accident and my son said: ‘Dad this and this is what happened.’ Every time they’d see I’d had a bottle or two, they would not want to be in the car and this is the bigger part that affected me.”

There was also the physical effect of alcohol.

‘The moment that made me say enough’

“There comes a time that drinking is giving you more pain, physically [so]. I can remember there was a time when my body was felling itchy, I was sweating all over and what was so scary was the hallucinations and the darkness coming,” he explains.

“I was scared literally and had to be held to sleep – those were the moments that made me say it is enough.”

In September 2012, a month after his status as “reigning Olympic champion” had ended as the Games took place in London, Bungei called a number he had been given earlier that year.

Soon after, he was checked into a rehabilitation centre in the Kenyan capital Nairobi.

Following his exit six weeks later – and displaying the same resolve that took him to the top of an Olympic podium – he has never drunk since.

He largely blames boredom for his downfall in retirement, where he found the transition from being a full-time training athlete to being permanently free just too difficult to handle.

“Being an athlete, I only had 20 days break per year for some 13-14 years – so when I retired, there was nothing much I was doing,” he says.

“I would buy a bottle of wine, sit in the house and before I knew it, it was over – I would send for another one. Just like that – within a year and a half – it had become chaotic and my life really was a mess.”

The descent was as blistering as Bungei’s pace, a runner famed for his outspoken views and trademark sunglasses.

He worries that other athletes may be facing similar challenges but refuses to divulge further details.

Nonetheless, an athletics representative who is familiar with the Kenyan athletics scene has his own views.

“It’s just socially acceptable and maybe they have friends who work during the week and party hard on the weekend and sometimes it’s hard for an athlete to say: ‘No, I am not joining you’,” explains Dutchman Michel Boeting.

“You have some athletes who will squeeze running into their lives instead of [thinking]: ‘How I will organise my life around running?” That happens more these days.”

Today, the affable Bungei tries to prevent others suffering from the same problems he did – supporting and guiding professional athletes as they transition into retirement campaigns in order to help them create a fulfilling life.

“There’s a stigma associated with it and that is why I decided to come out despite the fact that I had a name to protect,” he says.

“It makes me happy when I share my story and I know it might be able to save someone – that is how I got healed myself.”

He may have hung up his spikes nearly a decade ago but Bungei’s race is far from run.