The Nigerian newspaper headlines for for Thursday, December 12, lead with the letter written by Nigeria’s first lady, Aisha Buhari against Garba Shehu and Mamman Daura; the Senate call to the federal government and states over unemployment among other top stories.

The Nation reports that the government has moved to prevent a nationwide blackout as electricity workers strike enters the second day.

The strike began midnight on Tuesday following expiration of the 21-day notice issued by the workers.

Employees of the Transmission Company of Nigeria (TCN), Osogbo, the Osun State capital, said they had shut down the facility in compliance with the National Union of Electricity Employees (NUEE) directive.

The facility in Osogbo hosts the National Control Centre (NCC). The NCC in Osogbo is responsible for all Transmission Company of Nigeria’s (TCN’s) grid operations, monitoring and control of the transmission network.

General Secretary of NUEE Joe Ajaero said on Wednesday: “As you can see, power has dropped across the nation and will continue like that unless the government responds to our demands.

The Guardian reports that there are indications of a fresh split in the presidency emerged yesterday with the first lady accusing senior presidential media aide, Garba Shehu, of taking instructions from some people in government rather than from President Muhammadu Buhari.

In a statement personally signed by the Aisha and made available to reporters, Mrs. Buhari critically upbraided Shehu of sundry professional misdemeanors, accusing the spokesman of working against the First Family. 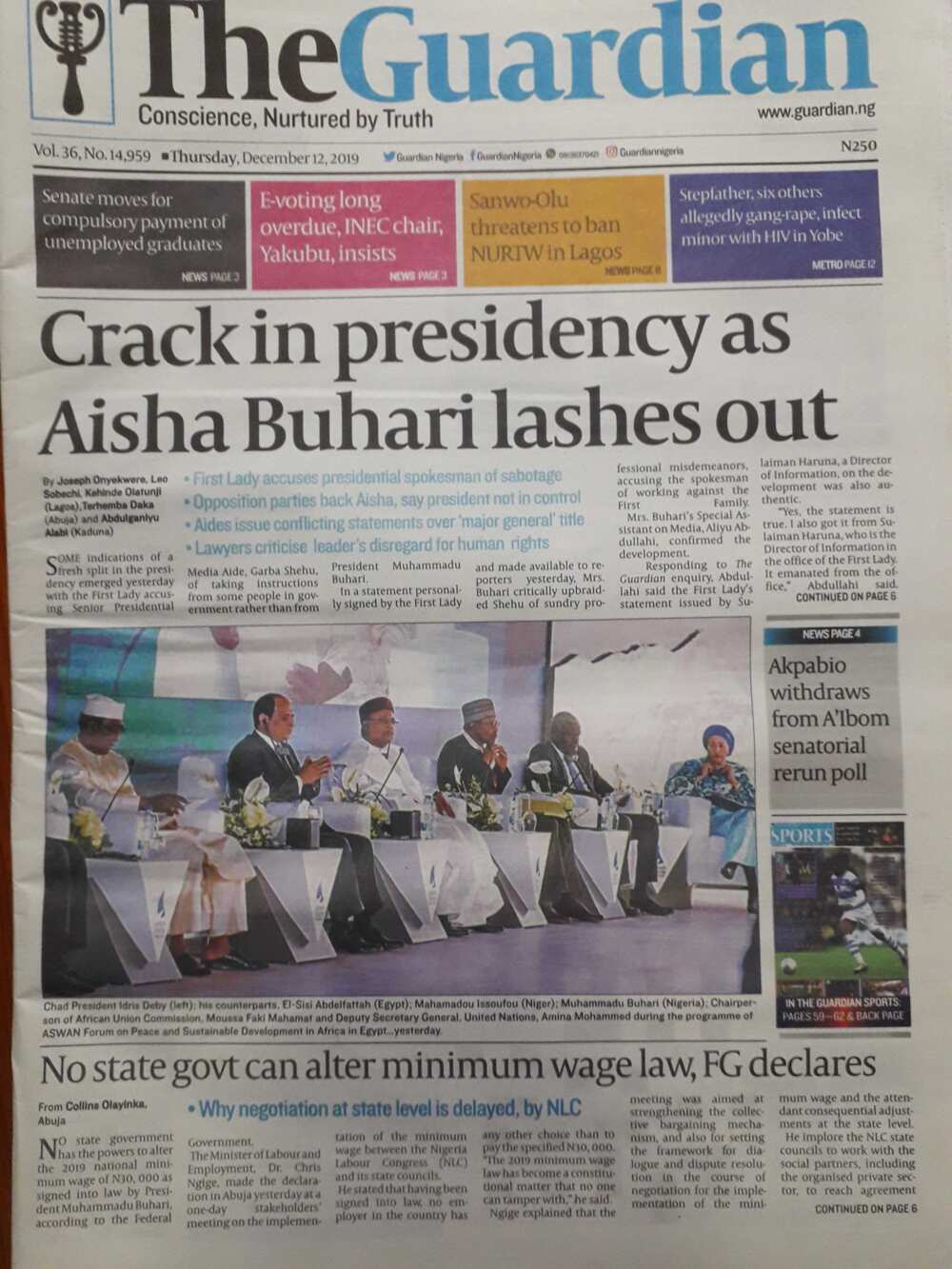 The Punch reports that the academic Staff Union of Universities has threatened to mobilise its members for a nationwide strike if the federal government stopped the salaries of lecturers for resisting enrolment on the Integrated Payroll and Personnel Information System.

The union noted that its experts had designed a “unique prototype of the IPPIS for the university system named, University Transparency and Accountability Solution, which it urged the Federal Government to implement in universities instead of the IPPIS. Vanguard reports that the Senate has raised the alarm over rising rate of unemployment in the country and called on the federal, state, and local governments to urgently declare a state of emergency on the problem.

With the State of emergency, the upper chamber said the three tiers of government would provide jobs for the teeming youth of Nigeria. NAIJ.com (naija.ng) – Legit.ng. We have upgraded to serve you better.

Man burnt to death after he killed 9 people, 7 of whom are his family members (graphic photos)

Okada ban: Fake soldier and policeman arrested for using ‘uniforms’ to scout for passengers on restricted routes in Lagos