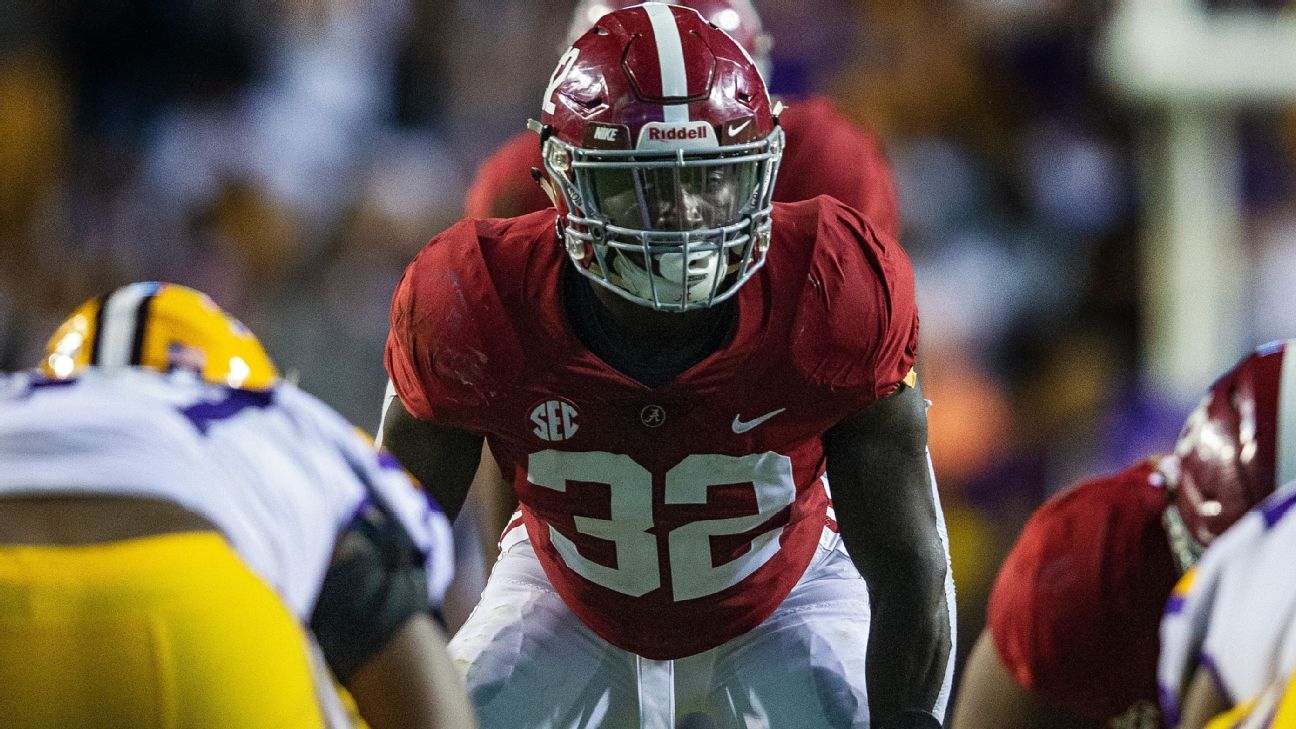 Alabama linebacker Dylan Moses‘ decision to return for his senior season has been held up as he seeks insurance protection for 2020. Earlier Thursday, his father, attorney Edward Moses Jr., said his son had given an “unadvised commitment” to come back to school rather than enter the NFL draft

Dylan Moses on Monday announced his decision to return to the Crimson Tide for the 2020 season. He missed all of this past season recovering from a torn knee ligament he suffered in August.

His father’s statement, released Thursday on social media by Dylan Moses, said Dylan had received a second-round draft grade from the NFL advisory committee. His father is investigating whether Dylan has a “loss of value” claim against an insurance carrier after receiving a “mid-1st round NFL draft projection,” the statement said.

Dylan Moses obtained the insurance policy on his own last spring. Loss of value coverage protects athletes from losing a predetermined future contract value because of significant injury or illness.

The statement goes on to say that Edward Moses Jr. was representing his son during negotiations with Alabama “to insure and to secure the proper protections for his return back to the University of Alabama’s football team for his senior season.”

Thursday night, Edward Moses Jr. told ESPN that he’s looking into what type of insurance policy Dylan would be able to obtain if he were to return to Alabama after his current policy lapses, and that Crimson Tide head coach Nick Saban and the coaching staff have been “very understanding and supportive of Dylan.”

“Coach Saban and his staff assured us that Dylan’s health, as well as the health of his team and their futures, are the University of Alabama’s highest priority,” Edward Moses Jr. said. “For that, we are forever thankful. At the moment, we are just doing our due diligence.”

As a sophomore, the Louisiana native and former five-star was a Butkus Award Finalist, leading the team with 86 tackles.

As of Thursday evening, Moses’ original announcement saying he would return for his senior season at Alabama had not been deleted from his verified Instagram page.

“Football is not who I am. It is what I do,” Moses wrote as part of the original post. “Life after football is what I am most concerned about, and I want to ensure I can put myself in the best possible situation to succeed in life, fulfill my goals and make my dreams come true.”

Before his announced return, ESPN NFL draft analyst Mel Kiper Jr. had Moses listed as the No. 1-rated inside linebacker in the 2020 draft class.

Without Moses, Alabama’s defense took a step back in 2019. Two true freshmen were forced into starting roles at inside linebacker and the Tide gave up a combined 94 points in two losses to LSU and Auburn.

The stories the people closest to Kobe keep remembering

Lewis Hamilton backs OBJ to be an all-time great