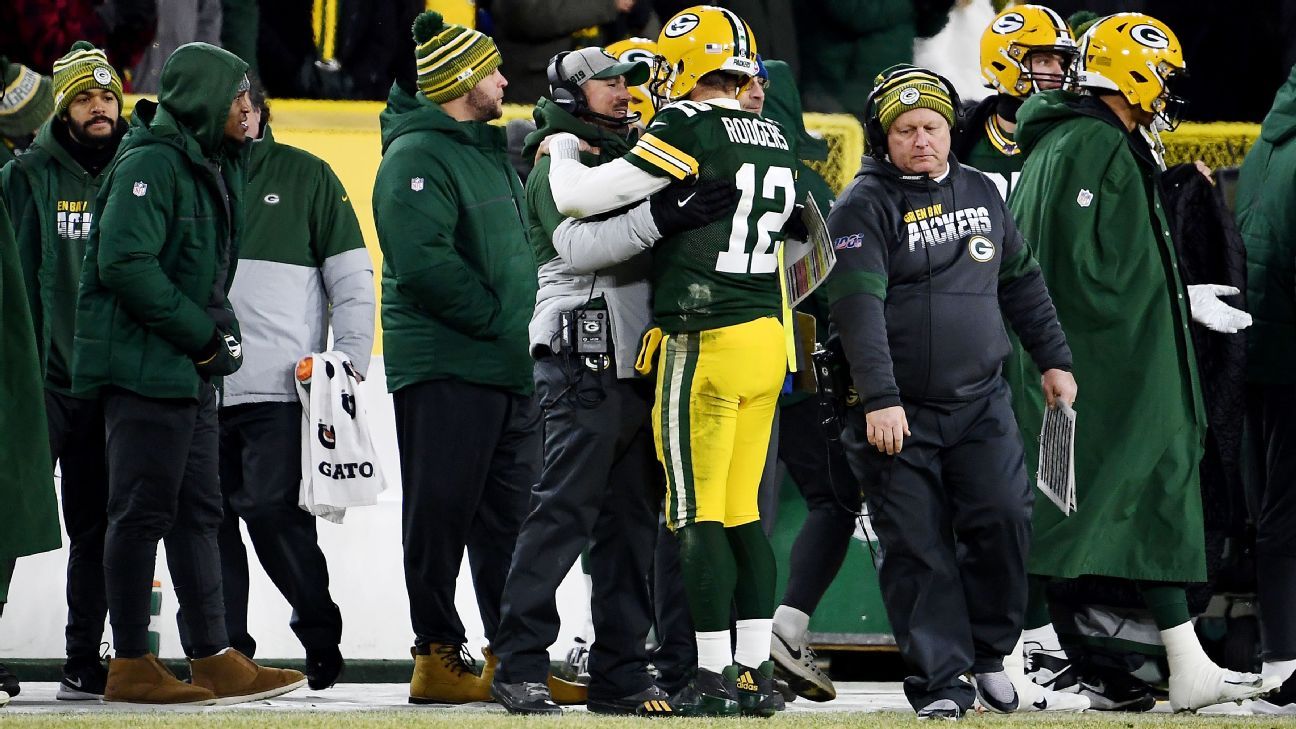 “The way I look at it,” Rodgers said in the days leading up to the Week 12 meeting at Levi’s Stadium, “we’ve got to beat them once at their place at some point. It would be nice to do it now.”

Of course, they did not. And it wasn’t close: The Niners won by 29 points.

They certainly earned it with their 28-23 victory over the Seattle Seahawks on Sunday in an NFC divisional-round playoff game at Lambeau Field. Unlike the topsy-turvy AFC, which will be decided by the No. 2 seed and the No. 6 seed, the NFC is down to the top two seeds, which is what the Packers and Niners were when they met on Nov. 24.

This will be the Packers’ first appearance in the conference championship game since the 2016 “run the table” season, which came two years after their NFC Championship Game collapse at Seattle.

One of the differences this time is a rookie head coach, Matt LaFleur, who is the first Packers rookie coach to lead his team to the playoffs.

If Rodgers played only so-so in the regular season — and even that was debated — he turned into a former version of himself on Sunday. Gone were throwaways en masse, off-target passes and out-of-sync plays.

Instead, he did what he usually does with an early lead in a playoff game. He improved to 9-1 in the postseason after having a halftime lead (21-3 in this case). The lone loss was the 2014 NFC title game collapse against Seattle.

This time, the Packers were surgical on some drives — Jones capped two of them with 1-yard touchdown runs — and they were spectacular on others. Adams’ first touchdown, a 20-yarder, was a double move to cap the first drive of the game, which began with a 23-yard run by Jones. Adams’ second TD, a 40-yarder on a post-corner, was even prettier. Plus, there was a 32-yard fade with 2:12 remaining after the Packers’ defense — fueled by the Smiths (two sacks each for Za’Darius and Preston) — came up with a key stop to avoid a repeat of 2014.

Adams caught eight passes — every one of them for a first down — for 160 yards, a Packers playoff-receiving-yardage record.

Rodgers had an efficient, 243-yard game on 16-of-27 passing with two touchdowns and no interceptions for a 113.7 rating.

“I thought he made some clutch throws — especially — I think a good indication of really good quarterback play is: Look at the third down,” LaFleur said. “It was one of the best performances we’ve had all year on third down; we were 9-of-13, I think it was.”

In their 37-8 loss to the 49ers in November, the Packers did next to none of the things they did Sunday. Now they have a chance to make amends with a Super Bowl berth at stake.

“I think there’s a lot to learn,” LaFleur said of that first meeting. “First of all, that’s a really good football team, and we know that we are gonna have to be at our absolute best in order to compete with them. And I think, unfortunately, last time, for whatever reason, we weren’t.”

The Packers will have their work cut out for them next Sunday in Santa Clara, California, as San Francisco opened as a seven-point favorite at Caesars Sportsbook.