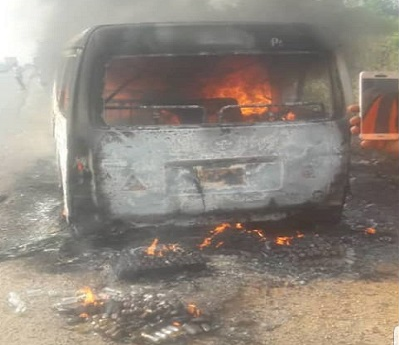 No fewer than nine people, seven adults and two children were burnt to death after a commercial bus went up in flames while on motion, at Ijebu-Ife area, along Ore-Ijebu-Ode-Sagamu expressway today Thursday January 16th.

A statement from the Federal Road Safety Corps (FRSC), Ogun State Command,  said the 19-seater bus belonging to a transport company, was reportedly travelling from the Eastern part of the country to Lagos, before the unfortunate happened.

The State FRSC Public Education Officer, Superintendent Route Commander, Florence Okpe, said the vehicle according to one of the survivors carried chemical substances suspected to be inflammable. She said her men upon receiving reports of the fire incident, moved swiftly and were able to contain the fire.

“The FRSC rescue team on receipt of the information raced to the crash scene and commenced rescue operations.

“While some of the passengers were rescued from the raging inferno, some other passengers as at the time of this report are still trapped in the burning vehicle.

“During the investigation, by the FRSC Crash investigators, one of the injured victims confirmed the total number of passengers as at the time the ill-fated vehicle commenced the trip were 17 passengers.

“The vehicle was coming from the East going to Lagos and was conveying the passengers with some chemical products identified  to be highly inflammable”.

President Buhari Increases Years Of Service For Teachers To 40

President Buhari condemns execution of CAN Chairman by Boko Haram