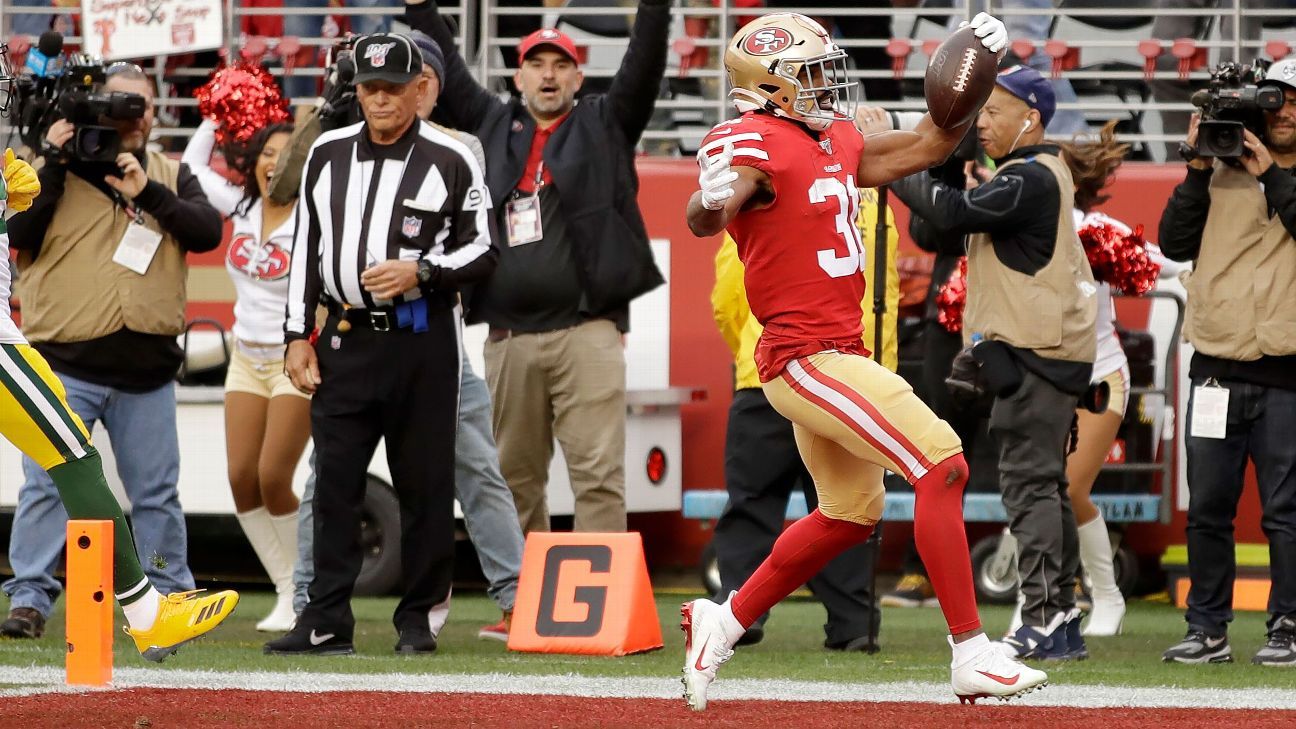 SANTA CLARA, Calif. — It’s safe to say third-and-8 isn’t a normal running situation, but when you’re the San Francisco 49ers with one of the best rushing attacks in the NFL, there might be no such thing.

Facing third-and-8 at the Green Bay Packers‘ 36 with 5:55 left in the first quarter, coach Kyle Shanahan dialed up a run for running back Raheem Mostert. Considering the field position, it was likely four-down territory for the Niners, allowing Shanahan to call a run in a spot normally reserved for a throw.

Mostert and the offensive line rewarded Shanahan’s faith as he darted off the left side and through Green Bay’s secondary for a 36-yard touchdown and a 7-0 San Francisco lead.

According to ESPN Stats & Information research, Mostert’s run was the third rushing touchdown this season on third-and-8 or longer with the first two belonging to the Miami Dolphins.

The most recent rushing touchdown on third-and-8 or longer in the playoffs came from 49ers quarterback Colin Kaepernick in the 2012 NFC divisional round against, coincidentally, the Packers.

Mostert hit 21.87 MPH on his run, the fastest rush by any NFL player in the past four postseasons.

Adding to the 49ers’ lead, Mostert chalked up a second touchdown, rushing from nine yards out with 9:12 left in the second quarter. Since Week 12 including playoffs, Mostert has nine rushing touchdowns, which is the second most in the NFL over that span after Derrick Henry (10).

27-0 with 0:45 left in the first half. #BeLegendary pic.twitter.com/vFVebCOuot

Mostert’s big game continued before halftime, scoring six points on an 18-yard rush with 45 seconds left in the second quarter to put the 49ers up, 27-0.

The only players with three rushing touchdowns and 150 rushing yards in an AFC or NFC Conference Championship Game (since 1970) are Mostert and Pro Football Hall of Famers Thurman Thomas and Emmitt Smith.

Trump impeachment: What’s Ukraine got to do with it?

Preparing for an active volcano to stir