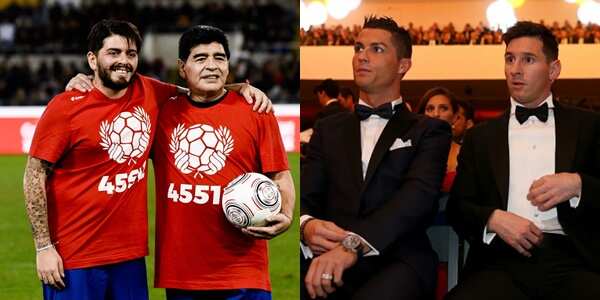 -Diego Maradona’s son, Maradona Jr, claimed Lionel Messi is the only player close to his father in football

– Dabbling into the all-time great debate, the son of the Argentina football icon hailed Messi and described him as a ‘phenom’

Diego Maradona’s son Maradona Jr has dabbled into the debate of all-time great that has always seen his father being compared with his fellow countryman Lionel Messi and Cristiano Ronaldo.

Speaking ahead of Napoli vs Barcelona UCL clash on Tuesday night, February 25, the son of the Argentina football icon submitted that Messi is close to his father in virtually all departments in football.

He, however, admitted that comparison between Cristiano Ronaldo and Lionel Messi is a no-go area because ‘you can’t compare a human being with an alien.’

“Messi comes close to him obviously, I always said that Messi is much better than Ronaldo,” the 36-year-old said.

“He’s close to him, but you can’t compare a human being with an alien.”

Maradona’s argument trailed a whirlpool of debate that has seen the football fraternity polarised into stands, which each side making a justification claim in favour of their hero.

Maradona Jr says: When someone compares Ronaldo to Messi, I get up and leave
Source: Depositphotos

The Argentine also revealed he always get furious when the Portuguese is being compared with the Barcelona hitman, saying “No one today compares to Messi.”

“I get up from the table and leave, because I will not sit there comparing Messi with Ronaldo.

“I tip my hat to Ronaldo because he’s a great forward, but he has no comparison with Messi. No one today compares to Messi,” he further submitted.

Maradona Jr also described Messi as a ‘phenom’ who ‘plays with calmness and quality that is incredible.’

He made final submission of his argument by aiming jibes at those who compare Messi with any other footballer on the planet.

Meanwhile, Legit.ng had reported that Gerard Pique might have put two bulls on horn-lock after the Barcelona defender admitted that club’s hitman Lionel Messi is greater than his fellow countryman Diego Maradona.

Messi vs Maradona debate is not new to football as there have been arguments and counter-arguments on who the best player is between the two Argentine legendary football icons.

But in what does not come as a huge surprise, defender Pique chose his teamman as the best player, boasting the Barcelona captain is clearly unique because of his “regularity and magic.”

Who make up the Criminal Minds cast? Details about the cast from the first season to now

Arsenal manager Mikel Arteta says he has recovered from coronavirusÂ