There was jubilation in Enugu state, Tuesday, as civil servants marched through the streets of Enugu to the government house, to thank Governor Ifeanyi Ugwuanyi for being the first governor of the state, since the inception of democracy in 1999, to pay them the minimum wage without rancour. The jubilant workers, who were led by the leadership of the Organized Labour in the state, comprising the state chairman of the Nigeria Labour Congress (NLC), Comrade Virginus Nwobodo, his Trade Union Congress (TUC) counterpart, Comrade Benneth Asogwa and Chairman of the Joint Public Service Negotiating Council, Comrade Igbokwe Chukwuma Igbokwe, among others, marched from the State Secretariat in GRA, through Garden Avenue, Ogui road and Bisala down to the Government House at Independence Layout. It was such an emotional event as the workers sang solidarity songs while also thanking Gov. Ugwuanyi for paying them the agreed new minimum wage, during the weekend. 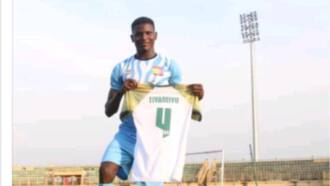 They displayed banners and placards with inscriptions such as Enugu State workers say Thank You His Excellency for the new minimum wage, Gburus, Enugu workers say Thank You for regular payment of salaries, Gburus, thank you for giving us new minimum wage without stress, Thank you for regular payment of monthly pensions, Gburus, you are a pacesetter, Gburus is our man. 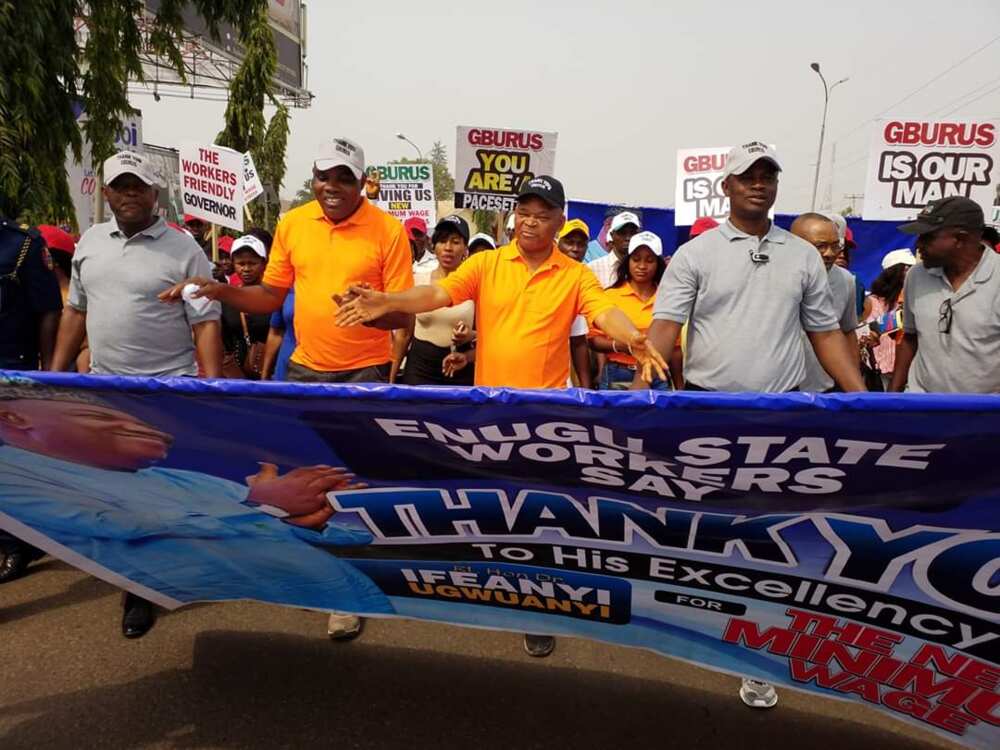 Speaking at the government house, Enugu, the state chairman of Nigeria Labour Congress (NLC), Comrade Nwobodo, told Gov Ugwuanyi that: “Enugu workers are very happy and delighted that this is the first time since the inception of democracy in 1999 that a governor in Enugu State paid us a new minimum wage without any crisis, stress or industrial action”.

Comrade Nwobodo disclosed that the workers were surprised and elated to receive their salary alerts during the weekend reflecting the new minimum wage in line with the agreed consequential adjustment chart. 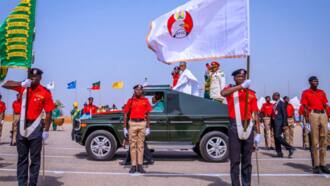 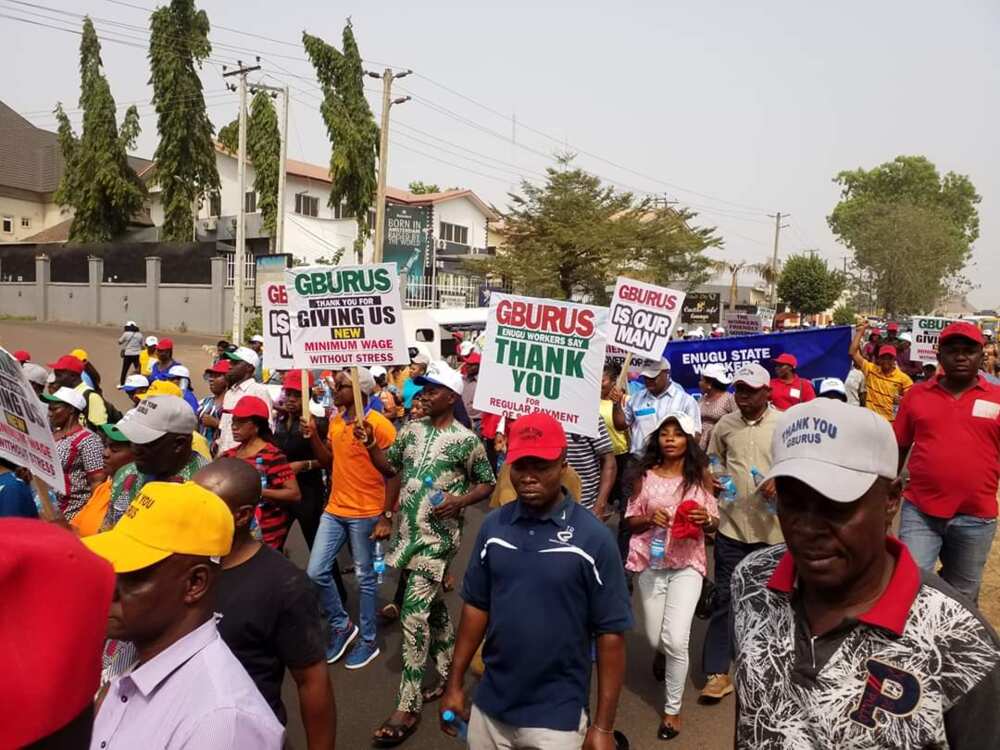 “Today is a special day in the history of Enugu state”, the labour leader also noted: “Because there is no worker in Enugu State that did not benefit from Ugwuanyi’s alert, and that is why we are singing now”.

In his speech, the state chairman of Trade Union Congress (TUC) of Nigeria, Comrade Asogwa, narrated Gov Ugwuanyi’s numerous interventions towards the welfare of the state workers, such as the 100 units of one-bedroom flats for civil servants between grade levels 01-10, regular payment of salaries and pensions and the payment of 13th-month salary.

“It’s instructive that Gov Ugwuanyi was recording such feats at a time when many states could not pay their workers’ salaries”, says Asogwa. According to the union leader, the process through which the winners of the houses emerged was “the greatest transparency we have ever seen in the history of leadership.” The TUC chairman maintained that the state workers marched to the government house to let the world know that: “It is because you have been able to turn the history positively as far as the minimum wage is concerned in Enugu state”.

According to him: “We want to also tell them that what we are doing today is significant because in the past, whenever minimum wage was being expected, it was always negative. Then, we would mourn from, maybe, New Haven to our Secretariat crying and shouting. Then, you would see all Enugu in pains. But today, we have come to Government House, smiling”.

Comrade Asogwa, who maintained that this was the first time the workers had a salary chart that was a product of collective bargaining, told Gov Ugwuanyi that: “The greatest political party you have identified with is the public service and you are a full registered member and we can tell you that you have our mandate, anytime.” 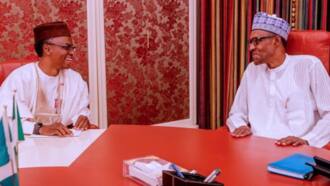 How el-Rufai helped me win 2015 election – Buhari reveals, hails governor as he turns 60

His words: “Your Excellency, I want to summarize by saying that history will never forget your regime. We stand here to say that in Enugu State, we have worked for years without a salary chart until somebody called Dr Ifeanyi Ugwuanyi a.k.a Gburugburu came and the dignity of workers was restored. We stand here today to say, Your Excellency, we are very grateful.”

Also speaking, the chairman of the Joint Public Service Negotiating Council, Comrade Igbokwe, endorsed the expressions made by his fellow labour leaders, adding that: “What is happening here today is the first in this country as far as the implementation of the minimum wage is concerned.”

Comrade Igbokwe, who joined other labour leaders and the state head of service, Mr Chidi Ezema in presenting a Thank You card to the governor on behalf of the state workers, revealed that: “The joy in the hearts of the workers today is overwhelming”. 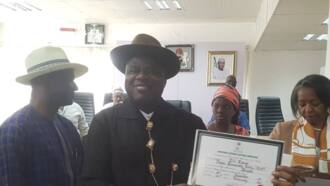 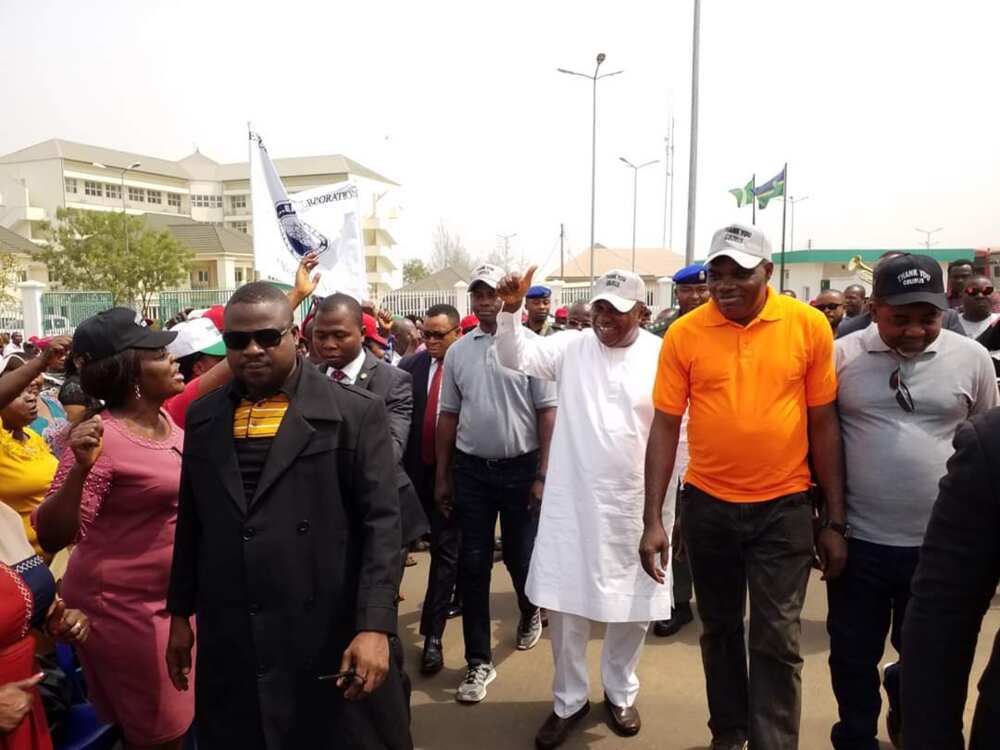 Gov Ugwuanyi thanked the state workers for their support, solidarity and appreciation in respect of the implementation of the new minimum wage in the state. The governor stated that the mandate of his administration is to serve the people with the fear of God, and reiterated his firm belief that “a worker deserves his wage”. He also appreciated the labour unions for the discipline and maturity they displayed in their engagement during the processes that led to the implementation of the new minimum wage.

“You will recall that in my inaugural address, I said that we will deploy government services to create fair and equal opportunity for every willing citizen to make a living and create wealth, educate our children, and enjoy life in a peaceful and secure environment. We remain committed to this.”

Enugu state is in the hands of God!

Kelsey Henson: Most exciting facts about the beautiful wife of Hafþór Júlíus Björnsson

Â I’ll be happy if I can get an inviteÂ  – Belgian born striker, Cyriel Dessers reveals his desire to play for NigeriaÂ