Yifei Liu is channelling her inner Disney princess on the red carpet premiere of Mulan.

The 32-year-old actress stunned at the premiere of Disney’s Mulan wearing a shimmering gold strapless gown embroidered with golden silk threads and sequins. To keep our eyes on the gown, the actress wore minimal jewelry except for earrings and wore her hair down in loose waves.

As for her makeup look, she also kept it minimal and natural, rocking only eyeliner and a peachy tint on the lips.

To make this fashion look even more majestic, the gold ensemble is accentuated by a breathtaking train from Elie Saab‘s Fall/Winter 2019 Haute Couture Collection.

Ahead of the Disney remake’s premiere in Los Angeles, Calif. on Mar. 9, Liu sat down with E! News to discuss the upcoming film and what it means to her to be a part of it. “To show it on [the] big screen is my honor,” said Liu of being able to embody the beloved character of Mulan.

Alongside Liu as Mulan, Donnie Yen will portray Commander Tung, Jason Scott Lee will take on the role of Böri Khan and Jet Li will play the Emperor.

Mulan is directed by Niki Caro based on the screenplay by Rick Jaffa, Amanda Silver, Lauren Hynek and Elizabeth Martin. 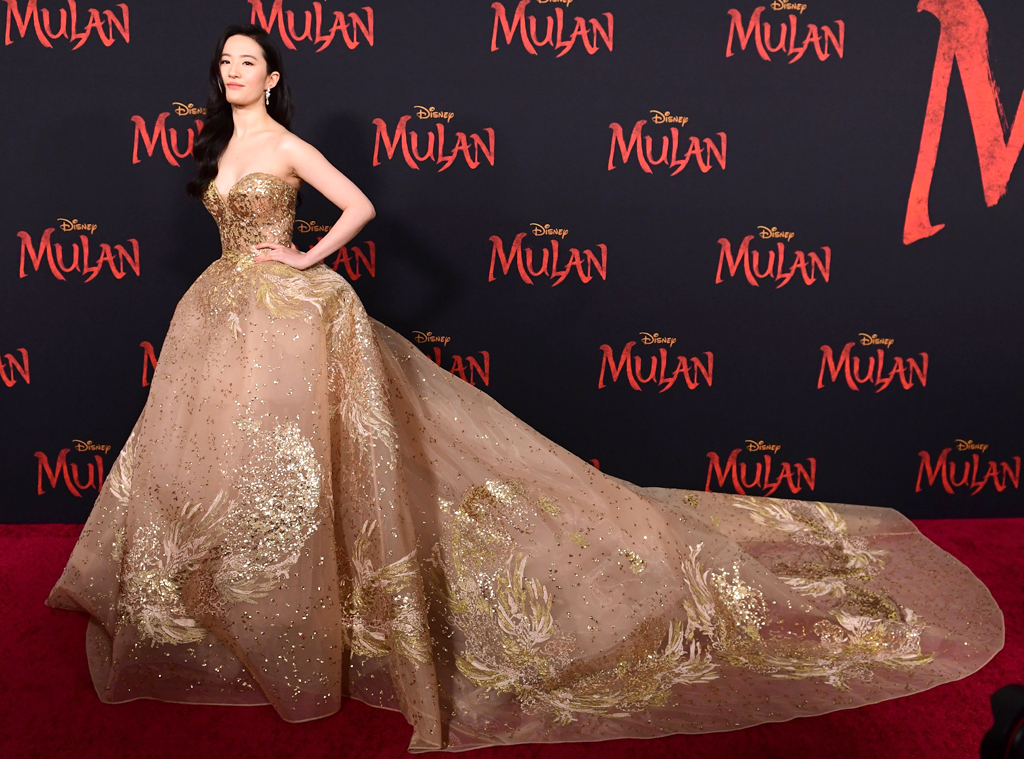 Ahead of today’s premiere, Caro also spoke to E! News about what it means to be the first woman director to take the lead on Disney’s most expensive live-action remake with a reported $200 million budget.

“It means a lot, in particular, today, on International Women’s Day, and today I get to acknowledge to myself and you and all your viewers that this is what it looks like when women make movies of this scale,” Caro said. “It’s very female-led filmmaking. I hope this film encourages other studios to give other women the opportunity to work at this level.”