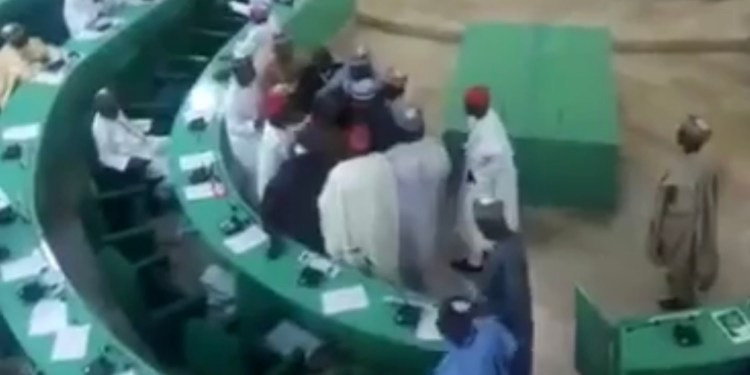 Kano State House of Assembly Speaker, Hon. Abdulazeez Gafasa on Monday March 16 announced the suspension of five of its members following the disruption of a plenary session last week.

Recall that members of the APC and PDP engaged in a free-for-all fight last week at the assembly complex, with an aim of taking over the control of the mace (the symbol of authority of the parliament) after a committee which was constituted to investigate former Emir of Kano, Sanusi Lamido Sanusi was about to submit its report.

At the resumed sitting today, Gafasa said the lawmakers involved in the fracas last week were suspended for 6 months for misconduct and violation of the rules of the house.

“The five members were suspended for violating the rules of the House especially Order IV Sub 4A, B, D and E disrupted the sitting and prevented proceedings from going on.

“They behaved violently and even attempted to snatch away the mace in a clear attempt to sabotage the sitting.”

Three Nigerians To Be Deported From India Over ‘Fake Visa, Passport’

More than one-fifth of Canadian companies will adjust pay if staff relocate: survey