Since parting ways with signal-caller Philip Rivers after 16 seasons, the Los Angeles Chargers began to forge a new path forward on Thursday by selecting Oregon quarterback Justin Herbert with the No. 6 overall pick in the 2020 NFL draft.

Herbert is expected to become the Bolts’ franchise quarterback, produce an exciting brand of offense and ignite a fledgling L.A.-area fan base.

However, the 22-year-old won’t be asked to accomplish any of it quickly. 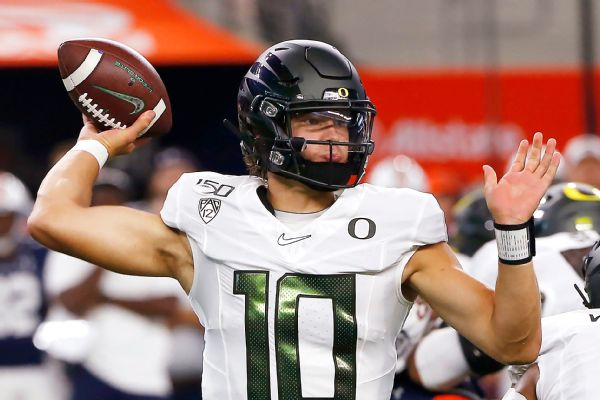 “He has a great head on his shoulders, and I’m not so concerned about him being the face of the franchise,” Chargers general manager Tom Telesco said after the first round of the draft concluded Thursday night. “He’s a rookie player who plays a very high-profile position, I get that. He’s a quarterback. But we also have two quarterbacks here right now who we’re happy with, so there’s no pressure for Justin to walk in Day 1 — we’re not asking him to come in and carry this football team whatsoever.”

From his home in Eugene, Oregon, Herbert expressed excitement about joining the Chargers, and he said he has been a fan of the Bolts and Rivers since growing up on the West Coast.

“I can’t wait to get down to L.A. and go out and be on my own,” Herbert said. “This is an opportunity and an experience that I’ve been waiting for my entire life.”

Telesco’s draft night, which was conducted from the kitchen table in his family’s home, also took a surprising turn late, when the Chargers traded up to make a second first-round pick. With the No. 23 overall selection, which was acquired from the New England Patriots in exchange for a second-round pick (No. 37) and a third-rounder (No. 71), the Chargers picked Oklahoma linebacker Kenneth Murray.

“To be honest, I was completely surprised,” Murray said about the Chargers’ move up to select him.

“He’s a player that was just a premium player for us, someone that we had graded very high,” Telesco said of Murray. “We just think he fits our defense to a T.”

But it is Herbert who will command attention as he attempts to win the starting quarterback role.

Chargers coach Anthony Lynn has said that veteran quarterback Tyrod Taylor is “in the driver’s seat” to take over the starting spot vacated by Rivers, and Telesco on Thursday reiterated that notion.

“You would never tell anybody that there’s no competition,” Telesco said. “We’ll see once we get on the grass, whenever that happens, we’ll go from there.”

A nine-year pro, Taylor has served mostly as an NFL backup, but he started three seasons in Buffalo, helping the Bills to one playoff appearance.

Herbert said he has not yet discussed his role with the Chargers.

The 6-foot-6, 236-pound Herbert was the third quarterback selected Thursday night. The Cincinnati Bengals took LSU quarterback Joe Burrow with the No. 1 overall pick, and the Miami Dolphins went with Alabama quarterback Tua Tagovailoa with the No. 5 selection.

Herbert is considered a well-rounded quarterback with excellent arm strength and agility outside the pocket. He also is a proven winner. Despite being projected as a first-round pick as a junior, Herbert returned to Oregon for his final season of eligibility and led the Ducks to victories in the Pac-12 championship game and the Rose Bowl.

“To be able to finish this past year off with our group of seniors to win the Rose Bowl and to be where we are today — it’s validation,” Herbert said.

Between the 2018 and 2019 seasons, Herbert’s completion rate jumped from 59% to 67%, the sixth-largest increase in the FBS. His yards per attempt also climbed from 7.8 to 8.1, and he went from throwing 29 touchdown passes to 32, while his interceptions dropped from eight to six.

Herbert finished his senior season with 3,471 passing yards (third best in the Pac-12) and 32 passing touchdowns (second best), capping it by being named offensive MVP of the Rose Bowl on New Year’s Day.

Herbert was named MVP at the Senior Bowl, where also he impressed scouts with his demeanor in practices. Although he is known to be introverted, his performance in Mobile, Alabama, helped ease concerns about his ability as a leader ahead of the draft.

“If you ask anyone at our facility at Oregon, they’d tell you differently,” Herbert said, when asked about concerns regarding his leadership. “I know what type of leader I am. I’m genuine, I’m real, I’m myself. When something needs to be said, I don’t have a problem saying it.”

Herbert joins a Chargers team that is hungry to rebound from a 5-11 season and a last-place finish in the AFC West.

He arrives as the Chargers complete their relocation process to L.A. After playing three seasons inside their temporary home at Dignity Health Sports Park in Carson, the Chargers are scheduled to play 2020 at Inglewood’s SoFi Stadium.

Herbert joins an offense that is expected to benefit from a bolstered offensive line after adding right guard Trai Turner via a trade and right tackle Bryan Bulaga in free agency. The Chargers also placed the franchise tag on tight end Hunter Henry at the price of $10.6 million and re-signed breakout running back Austin Ekeler to a four-year, $24.5 million contract. Wideouts Mike Williams and Keenan Allen also return after each posted 1,000 receiving yards last season.

Murray, a three-year starter at Oklahoma, is expected to contribute immediately on defense.

“We think he fits really well with what we do. The tape is pretty easy to watch to see how explosive and how fast and how much range he has,” Telesco said. “He’s going to come in and follow for a little bit but kind of learn how we do things and then hopefully see his career blossom as he gets older.”

After trading up to select Murray, the Chargers do not have a second- or third-round pick on Friday. They have four picks remaining through the final four rounds and are expected to target a wide receiver and an offensive lineman, among other positions.

Information from ESPN’s Cameron Wolfe was used in this report.

Everything You’ve Ever Wanted to Know About Being on Law and Order: SVU

Bucs move up to get Wirfs to protect Brady