Pandemic shopping pushes Costco to a record profit, but…

Paulo Costa’s incredible UFC journey, as told by those…

Checking In With the Father of the Bride Cast:…

Why haven’t Hall of Fame locks Drew Brees and… 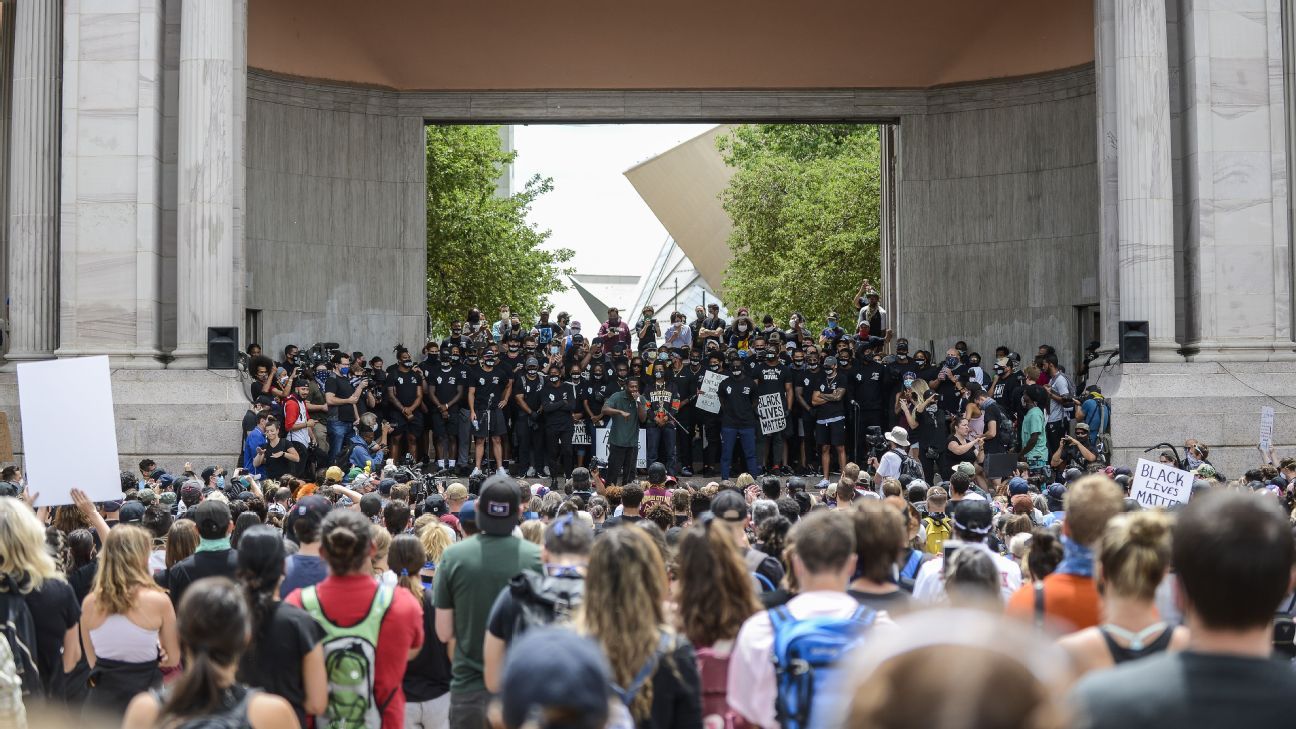 DENVER — More than 70 players, coaches and other staff personnel from the Denver Broncos — most wearing black T-shirts saying “If You Ain’t With Us, You Against Us” — led a group of thousands through downtown during a Black Lives Matter protest Saturday.

Many of the group from the Broncos, which included CEO Joe Ellis, coach Vic Fangio and his coaching staff, also were wearing masks that had “I can’t breathe” printed on them.

Linebacker Jeremiah Attaochu, linebacker Von Miller and safety Justin Simmons were among the players who briefly spoke to the crowd in a downtown park to start the march.

“We’re out here as players … to be an agent of change with policy and really taking part in the way this country works,” said Attaochu, who was the first of the players to speak to the crowd. “And that’s the only way we’re going to fix things — is if we use our voices to speak out on policies and things that are not allowing our people to be successful to have a chance in life. We can’t keep putting a Band-Aid on an old wound.”

“If you ain’t with us, you against us.” pic.twitter.com/OT0Vqfw3cj

He offered a prayer before Miller and other players spoke to the crowd.

“The time is always right to do what’s right,” Miller said. “Once we have awareness, we gotta come up out of oblivion. … We’ve got to use our moral compass to to make decisions on what’s right. Black, white — it doesn’t matter.

Safety Kareem Jackson was the driving force behind the team’s participation in the event. During a session with local media earlier in the week, Jackson had said he and his teammates were trying to find a way to get involved in protests that have happened daily in downtown Denver since George Floyd was killed on May 25 in Minneapolis.

Fangio had been the target of criticism earlier this week. After saying he supported his players participating in peaceful protests, Fangio also answered a question by saying he believed there was “no discrimination” and “no racism” in the NFL.

He made a public apology for those remarks Wednesday after speaking to the team’s players.

Chelsea won’t win league again until they fix their defending

Where things stand as MLB players consider vote on 2020 deal

Checking In With the Father of the Bride Cast: See What the Banks Family Has Been Up To