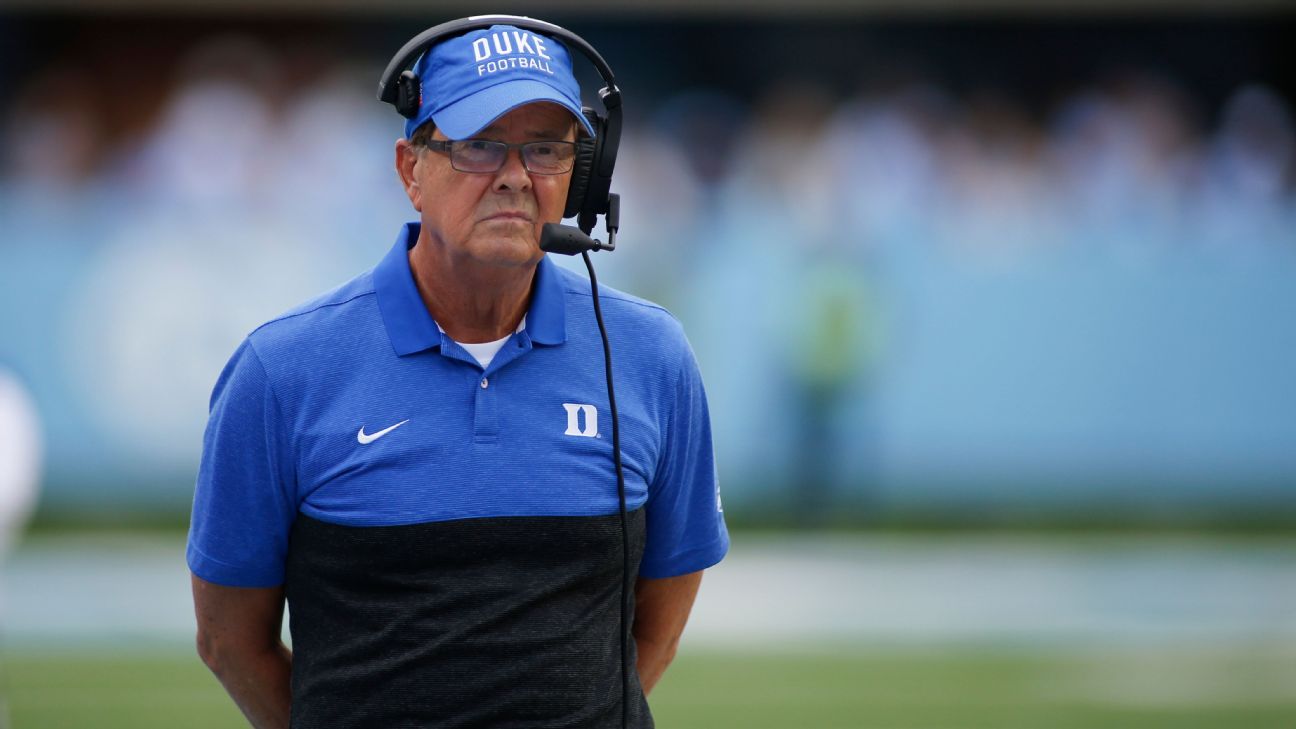 Duke football coach David Cutcliffe said he remains “very optimistic” there will be college football this season, but he doubts it will look much like a normal season due to the ongoing coronavirus pandemic.

“It’s going to be disrupted,” Cutcliffe said on a Zoom call Friday. “I don’t know if we’ll get 12 games in or start on Sept. 5. … I don’t think there’s any way we’re going to play without teams, at some point during the year, not being able to play. If you lose an entire offensive line to contact tracing, you can’t play a game with that contingency.”

Duke football players return to campus this weekend, and Cutcliffe said the school is working on finding ways to allow them to remain largely quarantined, but he expressed doubt that any foolproof solution was possible and worried whether other programs would commit to the same levels of virus mitigation as the Blue Devils.

For that reason, Cutcliffe said, he’s in favor of the ACC following the path of the Big Ten and moving to conference-only games, potentially playing more regionally with a possibility of playing the same opponent more than once.

“We’d all be better playing in our own leagues,” Cutcliffe said, noting his opinion was not necessarily that of the school or the conference because of the complexities of canceling contracts for non-conference games. “The flexibility of scheduling is far greater. There are 14 teams in our league, and all 14 can be held accountable. You can do everything in your power to keep your players healthy, but you can play one game and come out of it with a disaster if it’s not done properly on the other side. And the reality is, it’s not easy to do this financially, so it’s something I think is on the forefront of folks’ minds.”

Cutcliffe said he was frustrated by the lack of a consistent plan set at the NCAA level, hoping for some processes to be put in place to allow teams to loosen redshirt rules and other issues that might help teams find contingency options if players test positive. More importantly, he said, allowing individual schools and leagues to determine their own approach to mitigation creates significant problems.

“We’re not getting anything out of central command,” Cutcliffe said. “I was hoping we’d unify return to campus, to practice, to play. That makes too much sense. But sadly … litigation and politics … has been the biggest block.”

The ACC has considered moving to a conference-only schedule, according to sources, but no decision has been made. Stadium reported that Notre Dame could be a part of that plan, too, but Cutcliffe said any inclusion of the Fighting Irish should be contingent on revenue sharing.

“If they’re willing to share their money, sure,” Cutcliffe said. “But nobody gets something for nothing.”

Cutcliffe said spring football also remains a possibility, but it would create an entirely new set of problems — starting with the very definition of spring, which would be different between a school like Boston College and a school like Miami, in the same league. Players departing for the NFL or teams with a host of midyear enrollees would also further disrupt any semblance of uniformity.

Spring football is an option, Cutcliffe said, “when it’s the only option left.”

Still, the key to getting any games played, Cutcliffe said, is being flexible and open to finding solutions to continually shifting sets of problems.

“When general populations of students come back on campus, you’re going to see more cases,” Cutcliffe said. “The goal can’t be zero cases. That’s unrealistic. The goal has to be proper mitigation and if we do those things, I think we can get 10 games. We may get 12. But you have to be ready for weekly change.”