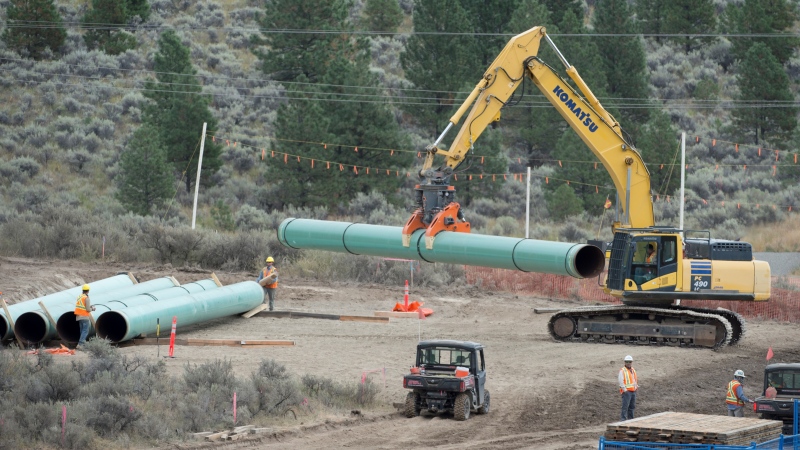 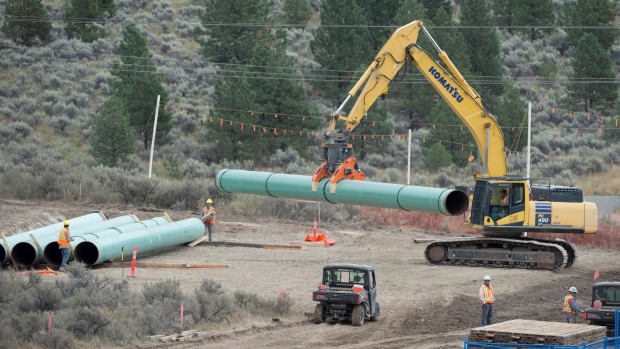 CALGARY — A year after construction was allowed to restart on the Trans Mountain pipeline expansion, its chief executive says the project is on budget and on schedule for completion by the end of 2022.

The project is advancing as expected despite challenges including the COVID-19 pandemic, a global slump in demand for fuel, a $5.2-billion rise in its estimated cost to $12.6 billion in February and ongoing protests by opponents, said CEO Ian Anderson in an interview.

The expansion project is designed to triple the capacity of the existing pipeline between Edmonton and a shipping terminal in Burnaby, B.C., to about 890,000 barrels per day of products including diluted bitumen, lighter crudes and refined fuels such as gasoline.

“We’ve got some major elements of the project to still do, but they’re all on track and there’s no critical path items I’m worried about at this point,” said Anderson. “We’re making great progress.”

“Given the economic circumstances in the country vis-a-vis COVID and the collapsing pricing in oil and gas, there’s absolutely no way that the Trans Mountain pipeline project is anywhere near viable or feasible,” said Grand Chief Stewart Phillip, president of the Union of BC Indian Chiefs.

He said he thinks the federal government, which bought the pipeline and its expansion project for $4.5 billion in 2018, is waiting for the expansion to “collapse under its own weight of economic uncertainties.”

More opposition on the ground will swell as construction moves farther into the B.C. Interior, Phillip said, adding he expects “Burnaby Mountain-style” protests like those that resulted in more than 100 people being arrested after they camped out in a conservation area in 2014 to block pipeline crews.

Trans Mountain has continued to enlist the support of Indigenous people on the pipeline route and has now signed agreements with 68 communities, Anderson said, leaving “a handful” that aren’t on board. He said the holdouts aren’t expected to prevent or delay the pipeline.

Authorities have been swift to act on a court injunction against civil disobedience, he added, noting he’s satisfied that will allow the company to continue unimpeded by opposition.

“”We’ve got some up a tree in Burnaby right now, we’ve got an individual up protesting in a tree, but they’re not inhibiting any work, they’re not getting in the way of any of our safe work and safety of our workers,“ he said, adding peaceful protesters are welcome.

A group of environmentalists have been taking turns occupying treetops in Burnaby since early August to protest the pipeline’s route through a conservation area.

The existing pipeline ran at full capacity at the height of the pandemic’s dampening impact on North American fuel demand, unlike competing export oil pipelines such as Enbridge Inc.’s Mainline system, Anderson said, a fact he attributed to its ability to reach diverse markets in B.C., overseas and in the United States.

Calgary-based Cenovus Energy Inc. used Trans Mountain this summer to collect oil from Alberta to fill an oil tanker in Burnaby and ship it through the Panama Canal to an Irving Oil refinery on the other side of the country in Saint John.

Anderson says that feat hasn’t been duplicated since, but it illustrates the ability of the pipeline system to access new markets when the expansion is completed for its 13 contracted shippers.

“We will increasingly see movements to China and Southeast Asia, I expect, as that market opens up. Right now, producers have very limited access to it because we’ve got such limited capabilities of moving oil onto those tankers,” he said.

He added the project is about 15 per cent complete now and is expected to be at 30 per cent by year-end.

This report by The Canadian Press was first published Sept. 15, 2020

Unless Buhari retraces his steps, there will be no Nigeria left by 2023 – Femi Fani Kayode

White House aiming for Trump pivot from virus to economy

Messi and Barcelona: The inside story on how everything fell apart, and what’s next