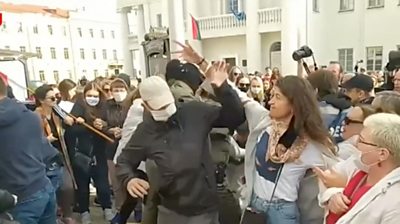 In Belarus, it’s now almost six weeks since the election where President Alexander Lukashenko claimed a much disputed victory.

Daily demonstrations against him have followed and so too have clashes with security forces.

More than a thousand people have been detained with many of them emerging with stories of being tortured.

Most of the detentions are carried out by masked men wearing clothes that give no indication of who they are and what organisation they belong to .

Fed up with the constant harassment, this week female protesters starting taking matters into their own hands trying to identify the men and make them accountable for their actions.