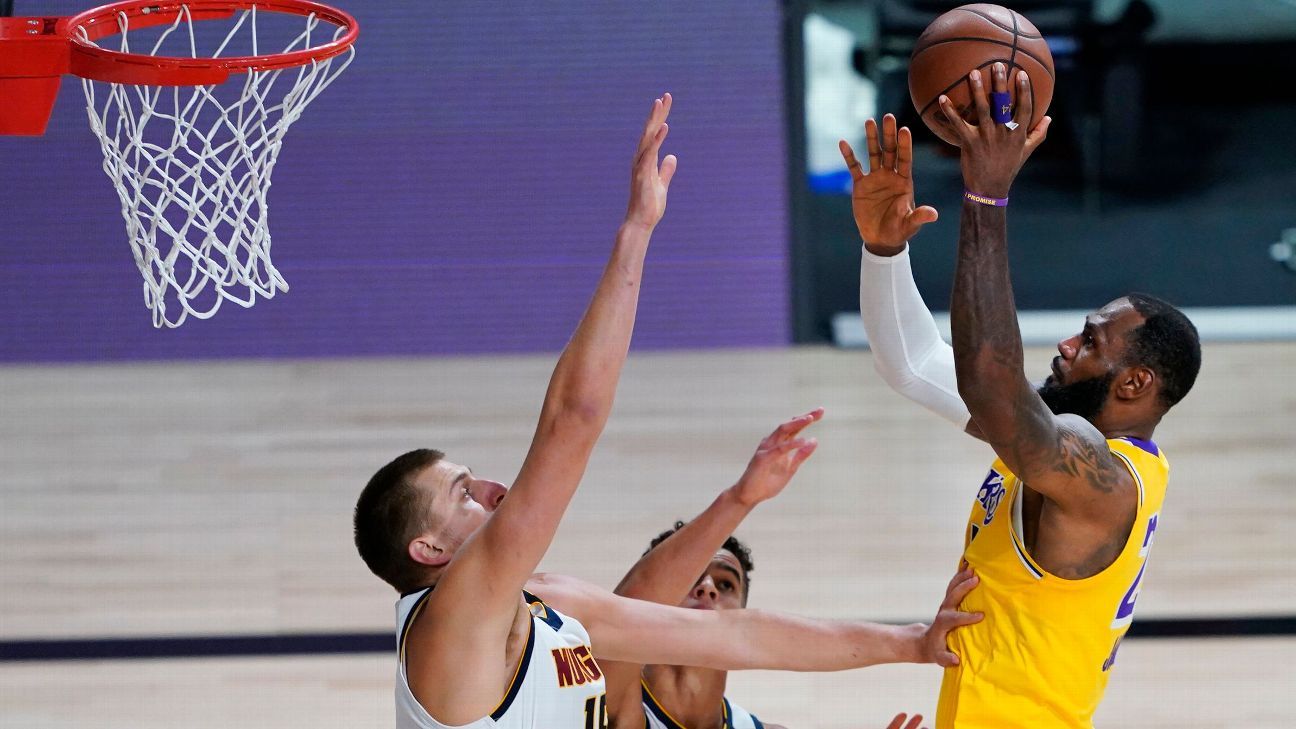 LAKE BUENA VISTA, Fla. — Up to this point, the crowning achievement of LeBron James’ storied career was leading the Cleveland Cavaliers back from a 3-1 deficit to beat the Golden State Warriors in the 2016 NBA Finals.

So it should come as no surprise that the Denver Nuggets, coming off back-to-back 3-1 comebacks this postseason, have James’ undivided attention, and respect, heading into Game 1 of the Western Conference finals on Friday.

“Very resilient, very confident, very driven, very well-coached team,” James said after practice Thursday when asked about Denver. “It takes a lot of energy, effort, a lot of desperation to be able to come back from a 3-1 deficit. They did it twice. So the respect level is out of this world for what we have for this ballclub. That’s how we’re going into this series, understanding what they’re capable of, where they stand.”

Only 13 times in league history has a team come back from 3-1 and the No. 3-seeded Nuggets are responsible for two of them — taking out the No. 6 Utah Jazz in the first round and then shocking the No. 2 L.A. Clippers in the conference semifinals.

When looking at the Nuggets, James sees a familiar face — Denver coach Michael Malone was an assistant coach for the Cleveland Cavaliers from 2005-10 when James starred for the franchise — and a familiar skillset — Nuggets center Nikola Jokic is renowned for his passing vision, like James.

“When you have the best player on the team, one of the best players on the team, not really caring about himself at all for the better of the team, that sends a message to the rest of the group,” James said of Jokic, who had 13 assists in Denver’s closeout win over the Clippers.

As for Malone, James — who was named to the All-NBA team this week for the 16th time in his career, passing Kobe Bryant, Tim Duncan and Kareem Abdul-Jabbar for the most selections ever — will compete against a guy who was on his side the first time he earned that elite season distinction.

“I know how much Coach Mo put into our schemes, put into our productivity, put into what we needed to do to go out and win ballgames when we were together in Cleveland,” James said. “I saw that. So the respect level, just seeing what he was putting into his craft, it made it easy for me to grow a likeness to him.”

If James was surprised that it’s the Nuggets, and not the Clippers that the Lakers will be playing in the conference finals after the so-called “Battle of L.A.” was hyped by the league all season, with games scheduled on marquee calendar dates — opening night, Christmas Day and on the first night of the seeding round in the bubble –he didn’t show it.

“I don’t have a comment about it really,” James said when asked about not playing Kawhi Leonard and Co. with a trip to the Finals on the line. “I was just sitting back and watching the game from a fan’s perspective, seeing big shots be made, big plays being made, missed shots, things of that nature. I was also [watching] as a scout, scouting both teams at the same time.”

When a reporter followed up and asked James if any part of him was disappointed that the Lakers and Clippers won’t get to “settle” their city’s supremacy, he dismissed it. “What were we settling?,” James shot back.

Anthony Davis, who was named to the All-NBA First Team alongside James, marking the first time Lakers teammates have done that since Bryant and Shaquille O’Neal in 2003-04, echoed that sentiment.

“We aren’t focused on any other team but the Lakers. That’s kind of been us, our whole thing the entire season. We focused on our own team,” Davis said. “Our focus isn’t on the Clippers or the ‘Battle of L.A.’ It’s more so what can we do to finish our season strong.”

And this Lakers team, 8-2 in the postseason so far, has never looked stronger.

“It’s great to be playing the way we’re playing right now. It’s the postseason, and that’s when you want to kind of hit your stride,” James said. “We still have a ceiling that we feel like we can get better. It’s our job not to put a cap on where we can go.”

What people in the NBA are saying about the Orlando restart