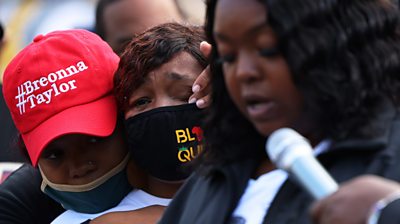 Breonna Taylor’s mother has given her reaction to the grand jury decision to not charge police officers directly over the killing of her daughter in March.

“I am an angry black woman,” she said. “Angry because our black women keep dying at the hands of police officers.”

Ms Taylor, a black hospital worker, was shot and killed when police raided her home in Louisville, Kentucky.

It was announced on Wednesday that one officer would be indicted – but for firing into a neighbour’s apartment.

In pictures: How coronavirus swept through Brazil