UFC Fight Night viewers guide: Goodbye (or not?) to… 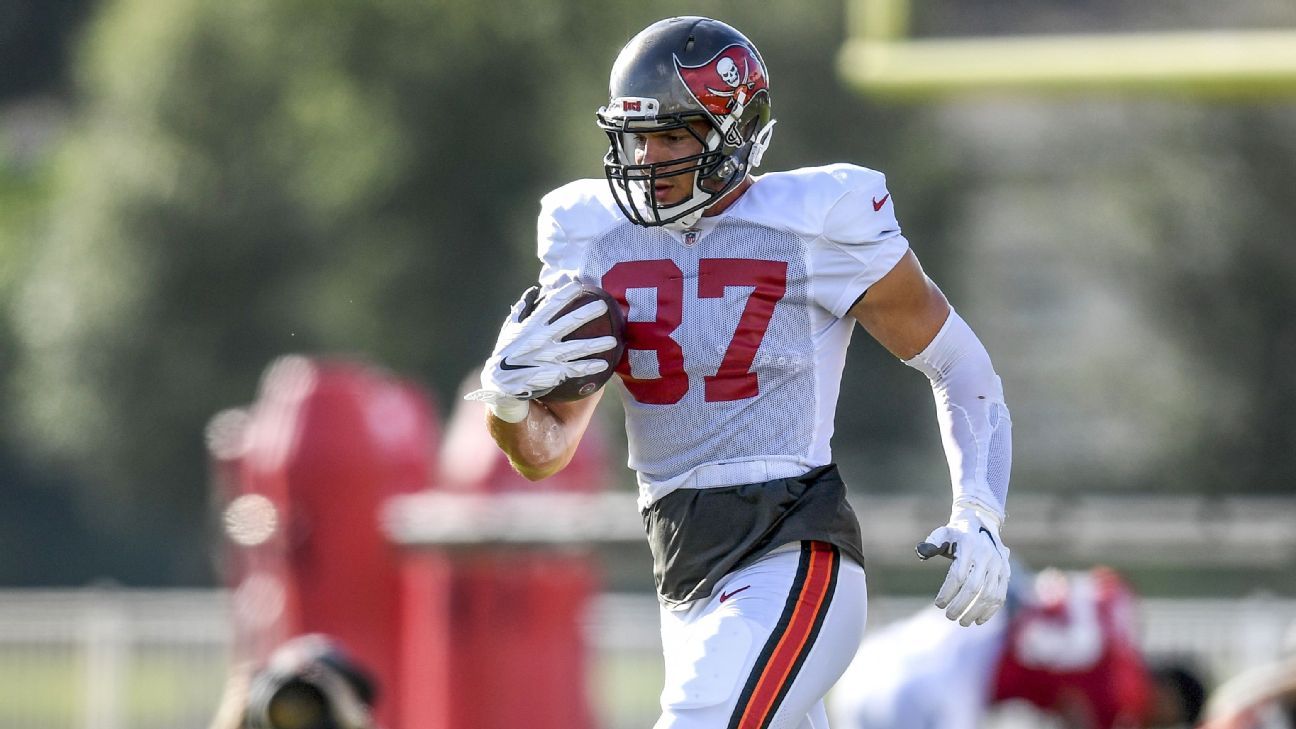 TAMPA, Fla. — Tampa Bay Buccaneers tight end Rob Gronkowski doesn’t appear to be fazed by his slow start in Bruce Arians’ offense — one that has rendered him with just two catches on four targets and 33 routes run, for 11 receiving yards in two games. He’s taking things in stride and treating it with some humor.

“I’m a blocking tight end. I came here to block, baby,” Gronkowski joked Friday. “So four targets is four more than I thought I was gonna get.”

It’s the lowest production of the five-time Pro Bowler’s career through the first two weeks of any season. In his seven other seasons where he’s played in Weeks 1-2, he’s averaged 8.7 catches on 13.4 targets, 127 receiving yards and 1.85 touchdowns.

According to Elias Sports Bureau, Gronkowski and quarterback Tom Brady have linked up for the fifth-most touchdowns by a QB-receiver duo in NFL history with 78. Gronkowski reached 1,000 receiving yards four times — one of just four in NFL history to do so.

His 91 touchdown catches were also fifth-most before a player’s birthday in NFL history, and his 0.69 receiving touchdowns per game is considered the fifth-best mark in NFL history (of players with a minimum of 60 games), according to ESPN Statistics & Information.

Even with a year away from football — one doesn’t forget the qualities that made that type of production possible. “I think I did,” Gronkowski said, laughing, before switching to a more serious tone.

“No, I didn’t forget. But every game plan can change differently, week-in and week-out. There’s [been] some times in my career, where you can be targeted 15 times and there’s other times you can targeted just a few. It all depends how the defenses are playing us, how the defenses are lining up against us, who they’re taking away and all that good stuff so, it’s just two weeks into the season so, just gotta go out there and just keep on fighting, just give it my all in whatever aspect of the game it is.”

Coach Bruce Arians did, however, say that the tight end’s role as a receiver in his offense is more about quality over quantity when it comes to catches, and they’ve been happy with his run-blocking and veteran leadership.

“We’re not throwing the ball 50 times to tight ends — that’s what we have receivers for [and] that’s the way our offense is built,” Arians said earlier this week. “Gronk’s playing great run blocking in the fourth quarter, so I’m not concerned with his pass catches or his targets.”

When asked to elaborate on the ‘running 40 yards past people’ comment — if it had anything to do with age or declining ability or needing to get in better ‘game shape’ — Arians indicated it was more about his style of play — he wasn’t known as a speed guy who could outrun defenders.

“It never was his forte, but if you’re gonna go up there and bump and run him, that’s a different story,” Arians said. “To just think that he’s gonna run past a corner who runs 4.4 — he’s never done that anyway. It’s not like it’s something new. But he can still go down the field, stretch the field — we had good times on him in practices — he can stretch the field, he’s just not gonna line up wide and run 40-yard balls.”

“Just game-to-game,” said Arians, who doesn’t believe opposing defenses are doing anything to take Gronkowski out of the game. “We came in here with no expectations and just, ‘Hey, whatever happens, happens, just — you play tight end.’ And we’ll see.” Gronkowski said defenses really aren’t doing anything to take him out of the passing game either. Brady, who coaxed Gronkowski out of retirement this offseason, believes it’s just part of the ebb and flow of a season.

“I don’t think we can be discouraged by certain things — some weeks it’s gonna be some guys’ weeks, other weeks, it’s gonna be other guys’ weeks,” Brady said. “Everyone’s working hard at practice to try to find their spot, their role. We gotta figure out what works or what combinations work or what we do well or what we don’t do well. And that’s just part of the season.”

Arians’ offense has never been known for heavy use of the tight end. From 2013-2018, Arians’ Arizona Cardinals had 506 balls thrown to tight ends — the second-fewest targets to tight ends of any team in the league. But some believed it would change given the Bucs’ talent and spending at the position. With Gronkowski, Howard, Cam Brate and Antony Aucliar, the Bucs are spending $18.9 million this year on that position — more than any other team in the league.

In 2019 — Arians’ first head as head coach of the Bucs — their tight ends were targeted 120 times — more than any other team Arians coached in five seasons with the Arizona Cardinals.

“We have good enough players where if we just be organic and put the ball in the right spot, it will start finding [Rob Gronkowski],” said Leftwich, who calls the Bucs’ plays on offense. “The least of my worries is really the ball finding Gronk. There’s things that we have to do better to compete and to win football games that we’re trying to do right now. Getting the ball to him and getting the ball to any specific player is always thought out week in and week out. We can do a better job of putting them in position — we will — and we’re all just starting to make plays across the board.”

Despite the lack of looks from Brady and lack of production, Gronkowski, whose career was marred by injuries, said he’s enjoying playing football again. He and Brady have an internet show produced by the Buccaneers called “Tommy and Gronky,” and this week’s episode featured Brady telling Gronk ‘dad jokes.’ In one of them, Brady asked, “Why couldn’t the pony sing?” Gronkowski responded, “Oh, oh, because he was a little hoarse!”

“It’s been going good. There’s times when you’re working and you’re grinding and digging deep to get through things — I mean, that’s not usually he joyous time, when you’re digging deep but that’s part of football and that’s part of what you signed up for,” Gronkowski said. “But then many other times, we’re just going out there and just playing ball and just being yourself so…It’s going good overall. There are a lot of great guys on the team that are a pleasure to be around that, that are a pleasure to work with — the same with the coaches so all that’s going good, man. We’ve just gotta keep putting the work in week-in and week-out.”

“I’m enjoying myself,” Gronkowski said. I know what I signed up for with football so I know there’s times where it’s gonna be a grind — it’s the game of football, there’s always gonna be ups and downs — hands down about that. I mean, that’s football. It’s been like that my whole life…but just going out there and working with the guys — it’s a pleasure for sure.”