#Endsars MUST WATCH, NIGERIA IS FINISHED!!!

Kim Kardashian Goes All Out for Halloween After Transforming…

Work Up a Sweat This Halloween With a Superhero-Themed…

US Election 2020: Biden and Trump in last weekend…

Kris Jenner Looks Unrecognizable in The Nightmare Before Christmas…

US election: ‘All Republicans should marry Democrats’

US election: The big issue that could hurt Trump

Lizzo Hilariously Dresses Up as the Fly That Landed…

Noah Centineo and Stassie Karanikolaou Continue to Pack on…

DAMWON usher in next generation of South Korean League…

Lady Gaga Serves Up a Fashion Extravaganza to Encourage…

Obong of Calabar asks Governor Ayade to step aside

#EndSARS:This is what Govt Shamefully shared as Palliative during…

Why Kelly Ripa Censored Her and Mark Consuelos’ Halloween…

Kendall and Kylie Jenner Win Halloween After Recreating Their…

Donald Trump Hails US Special Forces For Rescue Of…

Federal character should also include age, gender and religion…

Things I Don’t Want to See in My Rearview…

Sean Connery Dead at 90: Look Back at the…

i-Buy Shopping Festival: Everything You Need To Know About… 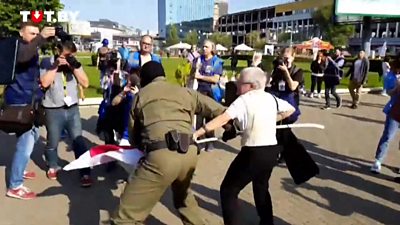 A 73-year-old opposition figurehead in Belarus was again among dozens of women detained during a protest against embattled President Alexander Lukashenko.

Thousands of people rallied in Minsk on Saturday to call for the resignation of Mr Lukashenko, who they accused of rigging last month’s presidential election.

Among the protesters was Nina Bahinskaya, a great-grandmother who has become an icon of the protest movement.

Video footage on social media showed a masked officer ripping a red and white flag out of her hands before bundling her into a van.

Ms Bahinskaya, who has been detained at previous anti-Lukashenko protests, was later released, local media reported.

CERB is ending, here is what to know about your benefits

Stars to go with Khudobin in goal for Game 5

Virginia gun rally: Authorities gear up for unrest in Richmond

Recovering from Covid-19: ‘I can’t get the images out of my head’

#Endsars MUST WATCH, NIGERIA IS FINISHED!!!