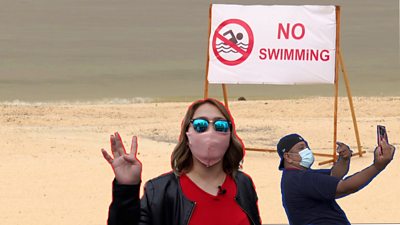 An artificial beach in the Philippine capital, Manila is causing controversy with some environmentalists arguing it is bad for the environment.

The ”Manila Bay Sands” project is part of a wider $20m government plan to clean up Manila Bay.

The white sand is made from crushed dolomite rock which is extracted from large dolomite mines.

The Kalikasan Environment Group says the mining operations are destructive and the synthetic sand can harm marine life.

Despite this, thousands of Manila’s residents have been flocking to the beach to catch a glimpse of the city’s hottest new talking point.

Climate change: Arctic Circle teens call for help to save their homes