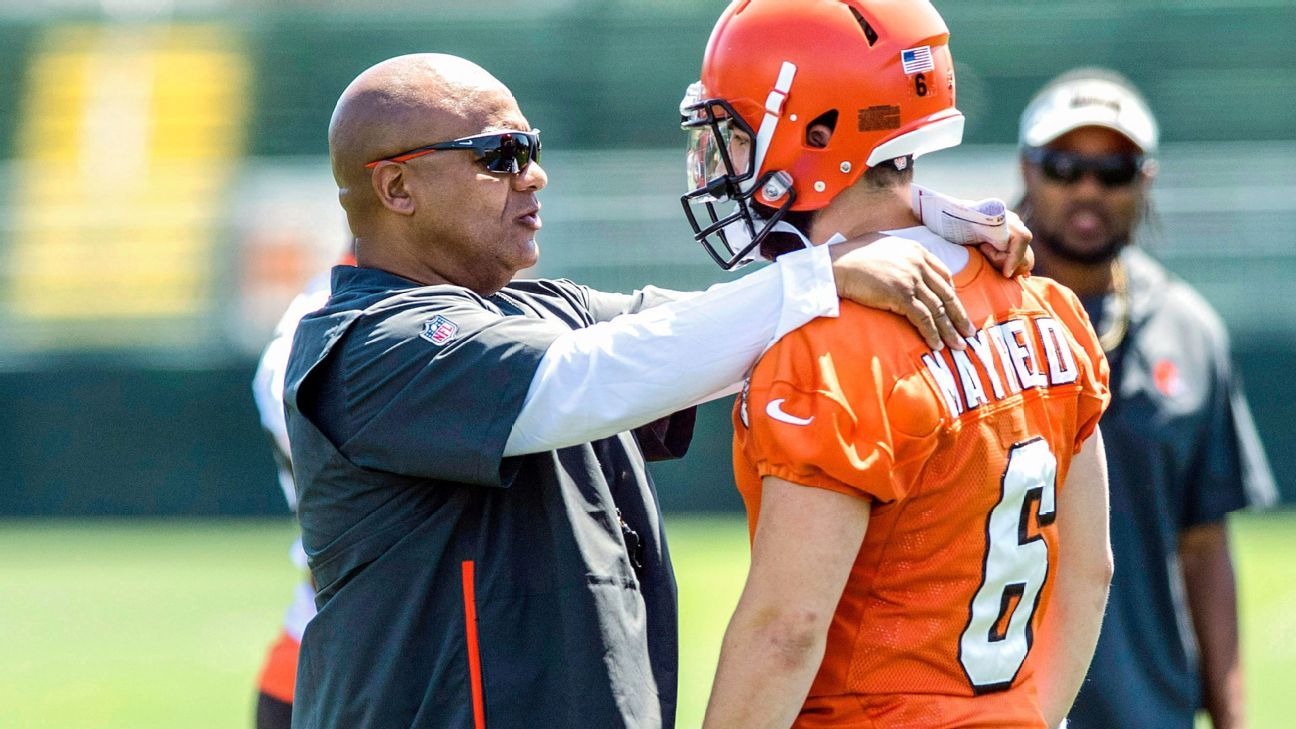 Former Cleveland coach Hue Jackson said Baker Mayfield needs to regain his confidence, and Jackson suggested the Browns should be calling more passing plays out of the shotgun formation to help their quarterback.

“Baker has not played as well as I think people think he should. To defend him a little bit, I think Baker is not playing in a system, in my mind, that showcases his talent and ability,” Jackson told 850 AM ESPN Cleveland on Friday. “You take away from who he is anytime he has to go under center. I don’t think that’s his strength. When he’s in the shotgun, he’s a much different player.”

Mayfield was primarily in shotgun while winning the Heisman Trophy at Oklahoma and during his rookie season under Jackson in 2018. But this season, the former No. 1 overall draft pick has been under center a career-high 61% of the time.

Under first-year head coach Kevin Stefanski, the Browns (4-2) boast their first winning record since 2014 and lead the NFL in rushing. But they lost to AFC North rivals Pittsburgh and Baltimore by a combined score of 76-13.

During Sunday’s 38-7 loss to the Steelers, Mayfield posted a 5.5 quarterback rating — the third-worst QBR performance in the NFL this season.

“Baker’s an alpha. This alpha male is not playing as well as he thinks he should or anybody thinks he should,” said Jackson, who went 3-36-1 as head coach of the Browns before being fired midway through the 2018 season. “They’re not winning because Baker is putting up 400 yards. They’re winning because they’re rushing the football. So yeah, there’s a lack of confidence. And they need to get that back.

“To me, that is the biggest job of the coaching staff the rest of the season. Because he’s going to be the key to this thing. And there’s no doubt they can run the football. But I think there’s a happy median there somewhere where you can still be a really good running team but be able to throw the ball at a high level for a quarterback who needs to go find a way to go get his own personal wins. Because he needs some. He hasn’t had that 300-, 400-yard game. He needs that to feel good.

“This guy was the first pick in the draft. Not a second-rounder or third-rounder. They took this guy for a reason, because he can throw the football. Now you’re saying what, he’s not good enough? I don’t think that’s the case at all.”

Mayfield and Jackson have a rocky past.

Two weeks after the Browns fired Jackson in 2018, he joined the rival Cincinnati Bengals as an assistant. When Cleveland defeated Cincinnati in Week 12 behind Mayfield’s four touchdown passes, cameras revealed an awkward exchange between Mayfield and Jackson, with Mayfield seemingly avoiding Jackson’s attempt at a postgame hug.

The following day on ESPN’s First Take, analyst Damien Woody ripped Mayfield for being hypocritical about Jackson taking another job, and cited Mayfield’s transfer from Texas Tech to Oklahoma as a walk-on. Mayfield responded on Instagram, writing back, “Not even comparable. ….I didn’t lose 30+ games be fake and then do that …I wasn’t going to have a scholarship. Good try though buddy.”

When the two teams met again, Mayfield stared down Jackson from the field after a big Browns play.

“There were just things that happened inside the building that I’m not going to get into detail with,” Mayfield said then of Jackson. “It’s in-house information.”

Biggest international shocks: Germany’s loss to Spain not even their worst

Sources: NBA players to arrive in unis, not outfits