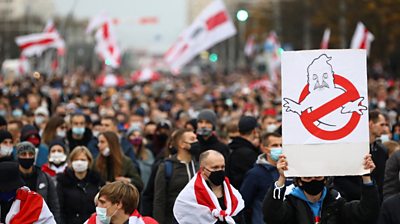 Mass protests continued in Belarus, as the opposition leader threatened a mass walkout by workers if President Alexander Lukashenko does not resign.

Sunday, 25 October, was the last day of an ultimatum set by Svetlana Tikhanovskaya.

Protests have swept the country since Mr Lukashenko claimed victory in an August poll widely viewed as rigged.

He has ruled Belarus for 26 years and is often described as “Europe’s last dictator”.