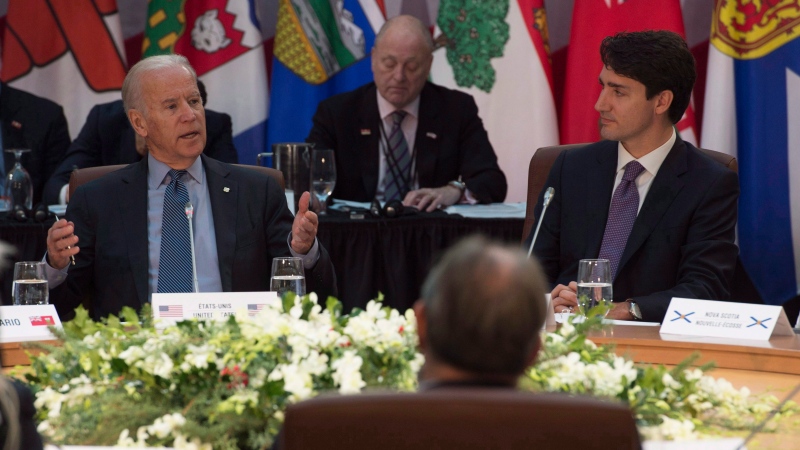 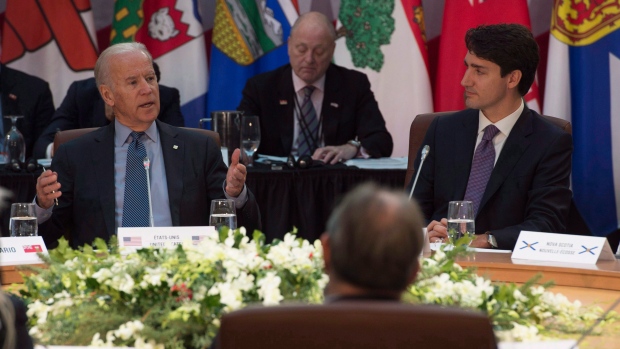 OTTAWA — Canada coped with nearly four years of Donald Trump rewriting or shredding the international trade rule book. But Canadian hope of a rosy return to rules-based bonhomie with its top trading partner under a Joe Biden presidency might be premature.

That warning comes from numerous trade experts, analysts and diplomats who have watched Canadians cope with Trump’s profound threats to their economic well-being.

Trump’s protectionist trade disruptions have included threatening to rip up the North American trade deal, insulting Canada during the renegotiation of a new agreement and imposing what were viewed as degrading national-security metals tariffs.

The Trudeau government tried to remain civil, but eventually called out the Trump Republicans as America’s most protectionist government. Before Trump, however, that honour belonged to another group: the U.S. Democrats.

Biden would try to restore stability, predictability and respect to Canada-U.S. trade relations, but he is a Democrat, and his party’s economic interests will diverge from Canada’s, said Lawrence Herman, an international trade lawyer with Toronto’s Herman and Associates and a former Canadian diplomat.

“It will not all be a return to sweetness and light.”

If Biden wins it will likely mean an end to the persistent threat of the steel and aluminum tariffs that Trump imposed on Canada in 2018, using executive powers under U.S. trade law that gave the president the right to impose them on national-security grounds.

Trump was, officially, targeting cheap Chinese steel flooding into the U.S. through Canada, imperilling domestic production of an important military commodity. But Trump’s commerce secretary made clear at the time the tariffs were being imposed to pressure Canada and speed up the renegotiation of the North American Free Trade Agreement.

Trudeau and his ministers were openly insulted that Canada’s longtime ally was labelling Canada as a security threat.

But even though Biden is expected to be more respectful of trade laws and practices, Herman said Biden is still beholden to anti-trade sentiment within his own party. Sen. Bernie Sanders, the Vermont socialist who challenged Biden for the Democratic party’s presidential nomination, views the international trade regime as a boon for corporations and the bane of rank-and-file workers.

“I don’t want to underestimate the importance of just having a much more friendly overall bilateral relationship and a recognition that Canada is an important country and a good friend to the United States,” said Meredith Lilly, the Simon Reisman chair in international trade at Carleton University’s Norman Paterson School of International Affairs.

“But on brass-tacks policy items, I don’t think that we should be expecting special favours.”

Biden is advocating Buy American protectionist policies that could prevent Canadian companies from bidding on U.S. infrastructure projects at the state and municipal levels, she said.

Canada has worked around the restrictions by having provincial premiers and state governors negotiate reciprocity agreements that allowed companies to bid on projects in each other’s jurisdictions, said Colin Robertson, a retired diplomat with extensive U.S. experience and the vice-president of the Canadian Global Affairs Institute.

“We’ll make that same argument, and I cannot see any good reason why the American governors would not go for it.”

Then, there’s the controversial Keystone XL pipeline that would carry Alberta oilsands crude through the U.S. Midwest to refineries on the Gulf of Mexico. Trump reversed ex-president Barack Obama’s cancellation of the pipeline permit in 2015. Obama acted in the face of widespread concerns from environmental groups that potential spills would cause serious damage.

“Trump has approved it, he supports it. Biden has vowed to kill it early in his administration by rescinding the presidential permit, and that, I believe, will be devastating, particularly to Western Canada and the Canadian energy sector,” David Wilkins, a former U.S. ambassador to Canada for George W. Bush, told a Tuesday video conference hosted by the Canadian Chamber of Commerce.

David MacNaughton, who was Canada’s ambassador to Washington for most of the Trump era, told the same forum that the transition away from fossil fuels to clean energy will take a long time so the two countries can still work together constructively.

“I would hope that we can find a way to have energy and the environment as a common theme between Canada and the United States. And when the last drop of oil is consumed in the U.S., that it actually comes from Alberta.”

If Trump wins re-election, he will likely extend his use of tariffs and executive orders to sectors beyond manufacturing, including intellectual property, digital trade and patents, said Herman.

In January, Heritage Minister Steven Guilbeault hinted that he might require American online streaming services such as Netflix and Amazon to pay sales tax in Canada.

“Trump could respond to that with tariffs on Canadian digital services,” said Herman.

“Trump has shown a willingness to use executive powers in a way that no other administration has done.”

Canada dodged another major trade bullet with Trump when it managed to negotiate a new North American trade deal with the U.S. and Mexico to replace the much-maligned NAFTA.

But there are no guarantees that the new Canada-U.S.-Mexico Agreement, or CUSMA as it is known domestically, would provide any certainty with a second Trump administration, said Lilly.

Trump backed down on Tuesday from his summer threat to reimpose aluminum sanctions under national-security provisions, which he originally levied despite CUSMA.

“Contrary to what some in the sector have been touting as a real positive, I think that overall, the agreement is going to make the manufacturing of cars in North America more expensive,” said Lilly.

“After four years, I think Canada has come to the conclusion that the United States does not have our back.”

This report by The Canadian Press was first published Oct. 28, 2020.

Coronavirus: Germany and France to decide on new lockdowns

Nigeria Air: We Will Not Leave Government Without Having It In Place, Hadi Sirika, Aviation Minister, Says

U.K. to allow Huawei in 5G networks but not in ‘core’ parts