No. 6 Oklahoma State enters Saturday’s tricky game against Texas as the only undefeated team in the Big 12, but even as the Cowboys have created some natural separation with their unblemished 4-0 record, coach Mike Gundy knows the margin is slim.

“There’s not a lot of difference in seven or eight teams in this league,” Gundy said, “just not hardly any at all.”

He’s right: Eight teams in the Big 12 have two or more losses — including Oklahoma and Texas, which have both lost twice. The Cowboys have a chance to distinguish themselves further, as they are in the midst of a season-defining, four-game stretch that will quickly reveal whether they should be taken seriously as College Football Playoff contenders — or regarded as afterthoughts

The Cowboys took a small but important step forward with last week’s win against then-No. 17 Iowa State, but ESPN’s Football Power Index gives the Cowboys only a 48.6% chance to beat Texas at home on Halloween. If Oklahoma State loses, the conference’s chances to send a team to the CFP will drop to 2.5%.

Oklahoma State is an underdog in two of its next three games, which includes back-to-back road trips against ranked opponents, No. 16 Kansas State and No. 24 Oklahoma. According to FPI, there’s only an 11% chance the Cowboys will make it to Thanksgiving undefeated.

“It’s obviously just take one game at a time right now, but there’s no question the next three games are going to be really tough and define the rest of the season,” receiver Dillon Stoner said. “We’re just going to worry about Texas right now and get ready to play them, and play them to the best of our ability, but in the back of our minds, we know who’s waiting after this.”

The Cowboys’ success to date stems in large part from a fast, veteran defense that runs two deep at almost every position and leads the league and ranks eighth nationally, allowing 12 points per game. Oklahoma State also has a powerful running game, led by Heisman hopeful Chuba Hubbard, and the offense got a boost last week with the return of quarterback Spencer Sanders from injury.

Players and coaches also point to a team chemistry that grew stronger over a somewhat turbulent summer as the program went through a self-evaluation prompted by a national outcry for recognition of social injustices and the Black Lives Matter movement.

“It really helped our team come together as a group, and it helped our coaching staff,” Gundy said. “It allowed me to see some things I hadn’t seen. I’ve been a head coach here 16 years. We’ve had a lot of success in the classroom, we’ve had a lot of success socially and on the field. What I figured out was, if you don’t watch it, then what happens is, you become a real creature of habit. That’s what happened to me, and these guys kind of made me aware of some stuff. In the big picture, what it did was it allowed all of us to grow, and that’s been a huge part of our players coming together in a season.”

Oklahoma State has the intangibles, it has the talent and depth — and still so much to prove. According to FPI, there’s an 88% chance the Big 12 champion will have multiple losses; no other Power 5 conference has more than an 18% chance to have a multi-loss champion.

Gundy said his biggest concern is keeping everyone within the program from listening to praise and expectations from outsiders and the media. Apparently, his quarterbacks got the message. They came up with a slogan they call “FTN,” which stands for: Forget the Noise.

“It’s really just saying no matter what happens outside of this stadium or outside this locker room, at the end of the day we have to go to practice every day,” Sanders said. “We have to give it 100 percent every day, we have to work hard every single day, no matter who the opponent is. We shouldn’t have to want to work harder this week because we’re playing Texas. We want to work the same every week and get better every week.”

While the offense continues to work to hit its stride, the defense has been above average, particularly on third and fourth downs. The Cowboys have held their opponents to a third-down conversion rate of .193, third best in the FBS, and they rank fourth in fourth-down defense. 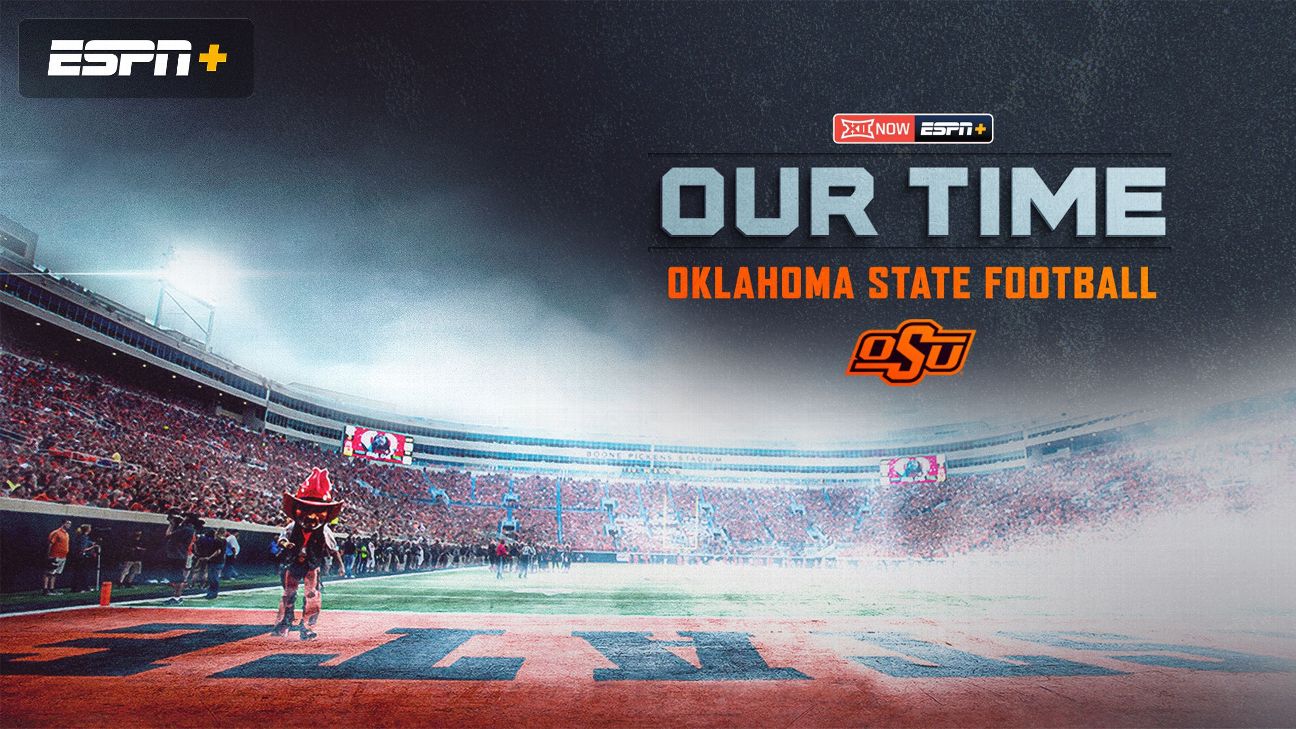 This all-access documentary chronicles the unique circumstances of Oklahoma State’s 2020 season — from navigating a global pandemic and preseason controversy to the urgency and uncertainty hanging over a season with big preseason expectations. Stream now on ESPN+

Defensive coordinator Jim Knowles attributed that to experience and players being in the right places so that when he calls plays, they execute them — something that has been particularly difficult when blitzing.

“I feel like we’re going to be able to match up with anybody,” Knowles said. “By ‘match up,’ we’re going to be able to compete. I don’t know if we’re dominant in any area. I think our coverage has been pretty dominant — time will tell about that — but I feel like we have a fighting chance in every game. That gives the program confidence. You always have confidence when we’re playing consistently.”

While Oklahoma State has stolen the spotlight in the Big 12, Texas can still reach the conference championship game — and its chances of doing so will jump from 33% to 52% with a win Saturday.

Texas coach Tom Herman said that he expects to see multiple fronts and blitzes from the Cowboys’ defense but that the challenge will be defeating their man coverage — which is something the Longhorns have been “a bit hit-or-miss with” in the past few weeks. Herman said Oklahoma State will outnumber the run and dare quarterback Sam Ehlinger to throw.

“They’re playing elite defense, elite not just in our league but in the country,” Herman said. “When you’ve got skill position players like they have, that are one touch away from a house call, those are two key ingredients to a championship recipe, and they sure do look like it right now.”

Winning the Big 12 title doesn’t guarantee a CFP semifinal spot, though. Oklahoma State’s place in the playoff picture, even as a conference champion, would depend in part on the final records of each Power 5 winner. If the Cowboys are undefeated, it would be difficult for the selection committee to keep them out of the top four, but the minute Oklahoma State loses a game, the entire Big 12’s playoff hopes will nosedive.

Gundy said that when he was asked about pressure early in his career at his alma mater, he resorted to coachspeak, downplaying it with comments like, “There is no pressure, it’s irrelevant, this is what we do.”

Now, in his 16th season with the Cowboys, Gundy has a different, maybe more seasoned perspective.

“I think the longer you go through a season, and you play well, there’s more pressure,” he said. “Our job as a coaching staff, my job in particular in leading these guys, is to instill quality information in them about what actually matters and things that can factor into the game on Saturday.”

Those things, he said, are conditioning, minimizing mistakes — particularly penalties — and turnovers, and winning on special teams.

“Each year, each team, during the season you have a different focus,” he said. “Right now, we have to be careful about listening to people tell us how good we are.”

It only takes one Saturday to change that perception.

Flacco signing deal with Eagles to back up Hurts

Till calls out ‘bitter’ Vettori for questioning injury