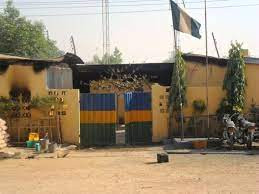 Confirming the incident, the spokesperson of the state police command, SP Orlando Ikeokwu, said one of the officers is yet to be accounted for. He added that the command’s building wasn’t razed.

The attack comes days weeks after hoodlums stormed the state headquarters as well as the state’s correctional center and released several inmates.

Chimamanda Adichie’s husband Dr. Ivara Esege lovingly cradles her stomach as her father is laid to rest in Anambra