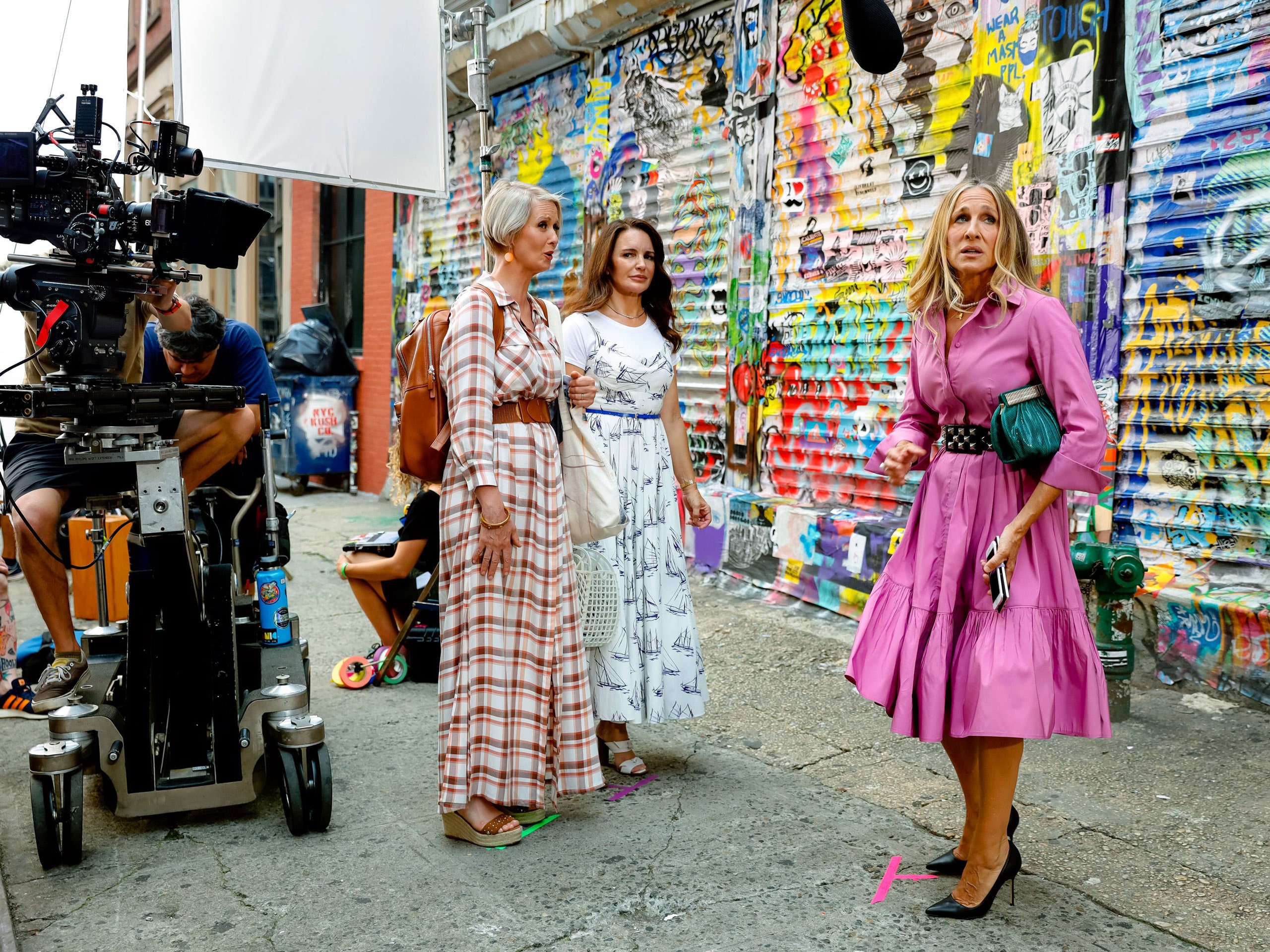 With filming officially under way for the hotly anticipated “Sex and the City” revival, fans have begun dissecting leaked photos and scripts to try to get to the bottom of what New York’s favorite gals are up to these days. Despite studio attempts to keep spoilers under wraps, viewers remain desperate to know whether Big is still in the picture, how they’re writing off Samantha, and whether Carrie ever got a MetroCard. But one development that’s been gleaned from closely studying paparazzi photos is that it appears that Carrie and the gang have befriended a group of camera operators and grips!

Fans have long speculated about who could possibly fill the void left when Kim Cattrall refused to reprise her role as Samantha, in order to pursue scatting full time. Perhaps Stanford would step up, or Sara Ramírez’s new character, Che? Or maybe Mike Richards would find a way to appoint himself to this role, too? And, though it’s still unclear just how tight Carrie, Miranda, and Charlotte will be with the camera crew, one thing is certain: the crew does appear in most of the behind-the-scenes photos that have leaked.

Naturally, the photos have got people wondering just how the girls met these grips. After all, it seems an unlikely pairing. And why do the ladies’ newest pals insist on always holding their equipment, no matter where they go? Naturally, we tried to analyze these images for clues, and what stood out is that the returning characters hardly ever even acknowledge the new teamsters. Uh-oh—cold shoulder much? I can’t wait to see what kind of crazy conflict caused that spat.

Whether the trio and the crew end up being friends or frenemies, fans can no doubt look forward to classic brunch scenes, featuring Carrie, Miranda, Charlotte, and three to five people awkwardly standing in a semicircle around them holding sound equipment, all chatting it up about their sexual misadventures.

Although at this point we can only guess, the second we get our hands on a watermarked script with more details, we’ll post it—even if it means that the person whose script it was is blacklisted from HBO for life. Honestly, what do they expect, leaving their coveted script lying around like that, inside a closed briefcase locked in a trailer? They have to be more careful.

Sure, you might argue that, if we were real fans of the show, we’d simply wait to enjoy it as intended, in its final, completed form—but, no, we want to piece it all together like a scavenger hunt. And, the sooner we gather all these clues to what might possibly happen in the show, the better. That’s why I’ve spent the past three weeks trying to infiltrate the set in an elaborate Matthew Broderick disguise, or get hired as an extra.

Luckily, there have been plenty of opportunities to scour production sites for details, because the show appears not to have the budget to actually build sets and instead just shoots wherever Sarah Jessica Parker’s trailer can find street parking in Manhattan. Nothing says “New York City is back” like hordes of people stopped in their tracks to watch Kristin Davis furrow her brow from across the street. And even without her deserved seat in the governor’s office, Cynthia Nixon will do more for New York’s economy than any elected official possibly could, just from Magnolia Bakery sales alone.

There’s much to look forward to whenever Us Weekly bugs Steve’s bar for intel or when the cameras stop rolling and the new series finally hits HBO Max. Oh, wait a minute, the camera crew was filming the show. Oh, O.K., never mind.

Zlatan Ibrahimovic considers himself ‘the best player in the world,’ says it’s irrelevant to compare players with each other

The Five Stages of Quarantine Bangs

You Praised Hitler in a Speech? How to Avoid Those “Oops” Moments