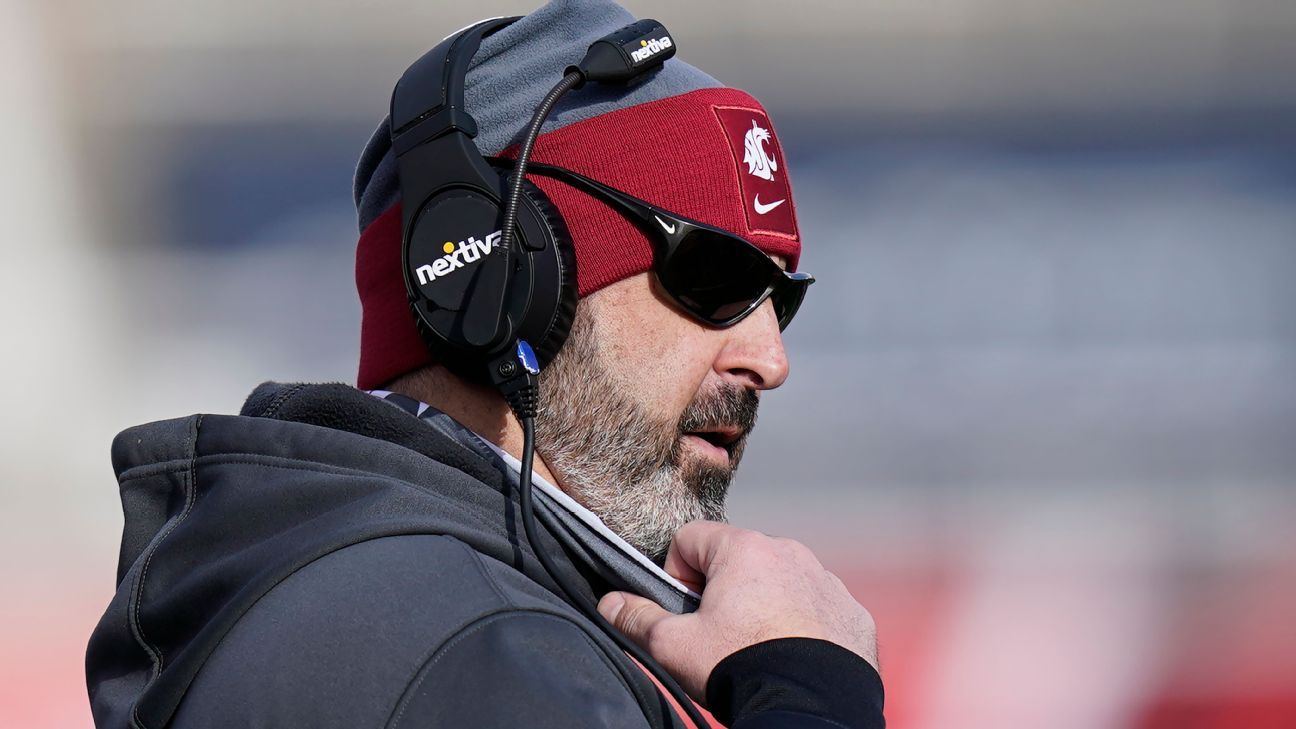 Washington State football coach Nick Rolovich and four assistant coaches were fired Monday for refusing to comply with a mandate that required all state employees to be vaccinated against COVID-19. It marked the end of a monthslong process during which Rolovich did not explain why he was unwilling to get the vaccine and ultimately sacrificed a $3 million annual salary, which had made him the highest-paid state employee.

While Rolovich’s contract ran through 2025, athletic director Pat Chun confirmed Rolovich’s departure will be characterized as a for-cause separation due to his inability to meet the requirements outlined in his contract. As such, he will not be paid for the remainder of his contract.

Here’s what we know and don’t know about Rolovich’s departure and what comes next for the 4-3 Cougars.

How was the decision made?

For Rolovich, the process was the same as it was for all other university employees. Those who sought a medical or religious exemption from taking any of the available COVID-19 vaccines were able to state their cases, in writing, to the university.

Rolovich, 42, said he applied for a religious exemption, which required him to attest why a COVID-19 vaccine was in conflict with a sincerely held belief. He then needed to offer examples for how those beliefs affected similar choices at other points of his life. While no major religious denomination has come out against COVID-19 vaccines, that has no bearing on the process.

The university used a blind evaluation process, meaning the two-person committee that evaluated Rolovich’s request did not have access to any identifying information while making its determination. Had the committee not granted his exemption, that would have been the end of the line (pending an appeals process). However, based on statements from Chun, it appears Rolovich did receive the exemption. Chun said Rolovich’s “accommodation request” was denied, which indicates an evaluation was made beyond the initial exemption request.

The way the process works is that after an exemption is granted, it triggers a second step in which the human resources department takes the ruling to the employee’s supervisor (Chun), who is then left to determine whether accommodations can be made to allow the employee (Rolovich) to meet all the obligations of their job.

Neither Chun nor school president Kirk Schulz explained how that determination was made, but considering the significant number of people a head football coach is expected to come into contact with on a daily basis — around the team, in recruiting, at various functions throughout the year, etc. — the short-term masking and social distancing solutions that had been in place weren’t tenable long term. The university had months to prepare for this, and the process was undoubtedly vetted from a legal standpoint to protect against potential lawsuits.

Who are the four assistants who are also out?

Stutzmann’s younger brother, Billy Ray Stutzmann, was dismissed as an offensive assistant at the Naval Academy in September for refusing to follow the academy’s vaccine requirement.

Who is interim coach Jake Dickert?

Before joining Rolovich’s staff last year as defensive coordinator, Dickert spent three years at Wyoming, including the 2019 season as DC on coach Craig Bohl’s staff. Before that, he spent a year at South Dakota State (safeties coaches and co-special teams coordinator) and was the defensive coordinator at Division II school Minnesota State, Mankato in 2016.

Dickert played wide receiver for Wisconsin-Stevens Point (2002 to 2006) before joining Bohl’s staff at North Dakota State as a defensive graduate assistant in 2008. That sent him down a path that included coaching stints at South Dakota, Southwest Missouri State and Augustana.

In May, Dickert tweeted a picture of him getting his second COVID-19 shot to become fully vaccinated. His first game in charge will be Saturday at home against BYU.

How will the coaching staff be filled out?

Names should quickly start emerging, and WSU has been working behind the scenes for weeks to prepare for this possibility. Expect at least some of the vacancies to be filled by midweek, but it will be especially tough to find coaches familiar with the run ‘n’ shoot offense Rolovich installed. With three of the departed coaches from the offensive side, a lot will be put upon offensive coordinator Brian Smith.

What happens to the unvaccinated players?

Because they are not considered employees, the process is different for the players. There is a vaccination requirement for students, too, but the consequences are different. Any students who were not vaccinated by Sept. 10 faced a hold on their accounts, meaning they will be unable to register for spring classes. The last time WSU publicized the vaccination rate among players, it stood at 83%, which means the remaining 17% — or roughly two dozen players — would not be able to return to WSU in the spring.

How are players reacting?

Rolovich is known as a players’ coach and has been defended at every opportunity by his players when asked about their coach’s job status, starting with Pac-12 media day in July, when Rolovich was forced to attend remotely, all the way through Saturday’s win over Stanford. Last night, numerous players, including starting QB Jayden de Laura, took to social media to thank their coach.

Everyone bashes this man day in and day out like he is not human or has feelings. Forcing him to have no friends all he had was us and all we had was him love you forever @NickRolovich

Crazy to think that a year ago I was back in Australia not knowing what to do with my life and Coach Rolo took a chance on me. He was my Coach, my mate and most importantly my mentor and taught me valuable life lessons that will always be with me! Love ya @NickRolovich 🇦🇺🦘

As Bitcoin goes mainstream, Wall Street looks to cash in

The red-hot St. Louis Cardinals are finding their stride at the right time