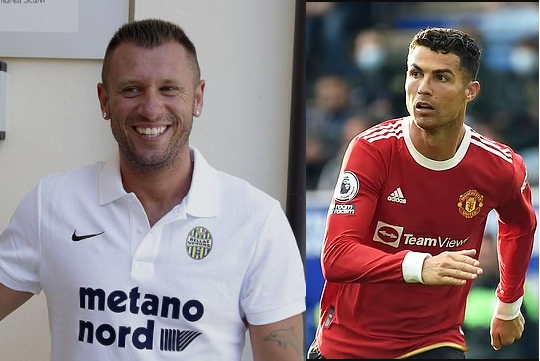 Italian football legend, Antonio Cassano has launched another scathing attack on Cristiano Ronaldo by claiming that the Portuguese star is not even in the top five greatest players of all-time

Ronaldo was branded the greatest player ever by his agent Jorge Mendes, after the 36-year-old was included on the 30-man shortlist for the Ballon d’Or prize, which the Portuguese icon has won five times before.

Retired Italy star Cassano, who has been critical of Ronaldo in the past, believes Pele, Diego Maradona, Lionel Messi, Johan Cruyff and former Brazil striker Ronaldo Nazario are all above  the Manchester United star in the history of football’s best.

‘Enough theatre (from Jorge Mendes),’ Cassano told Christian Vieri’s Twitch channel Bobo TV. ‘Is Cristiano Ronaldo the best in the history of football? He is not even in the top five.

‘Messi, Pele, Maradona, Cruyff and Ronaldo are on another level.’

Back in March,  blasted the Portuguese forward while he was playing for Juventus for being too selfish and not caring about his team-mates.

‘Cristiano only thinks about his goals and records,’ Cassano said in March of this year. ‘He’s always been a bit selfish, he doesn’t give a damn about others scoring goals.

‘He does not live for the game – he lives for the goal and in this moment the situation is getting worse. I think Cristiano has done terribly over the last three years.’