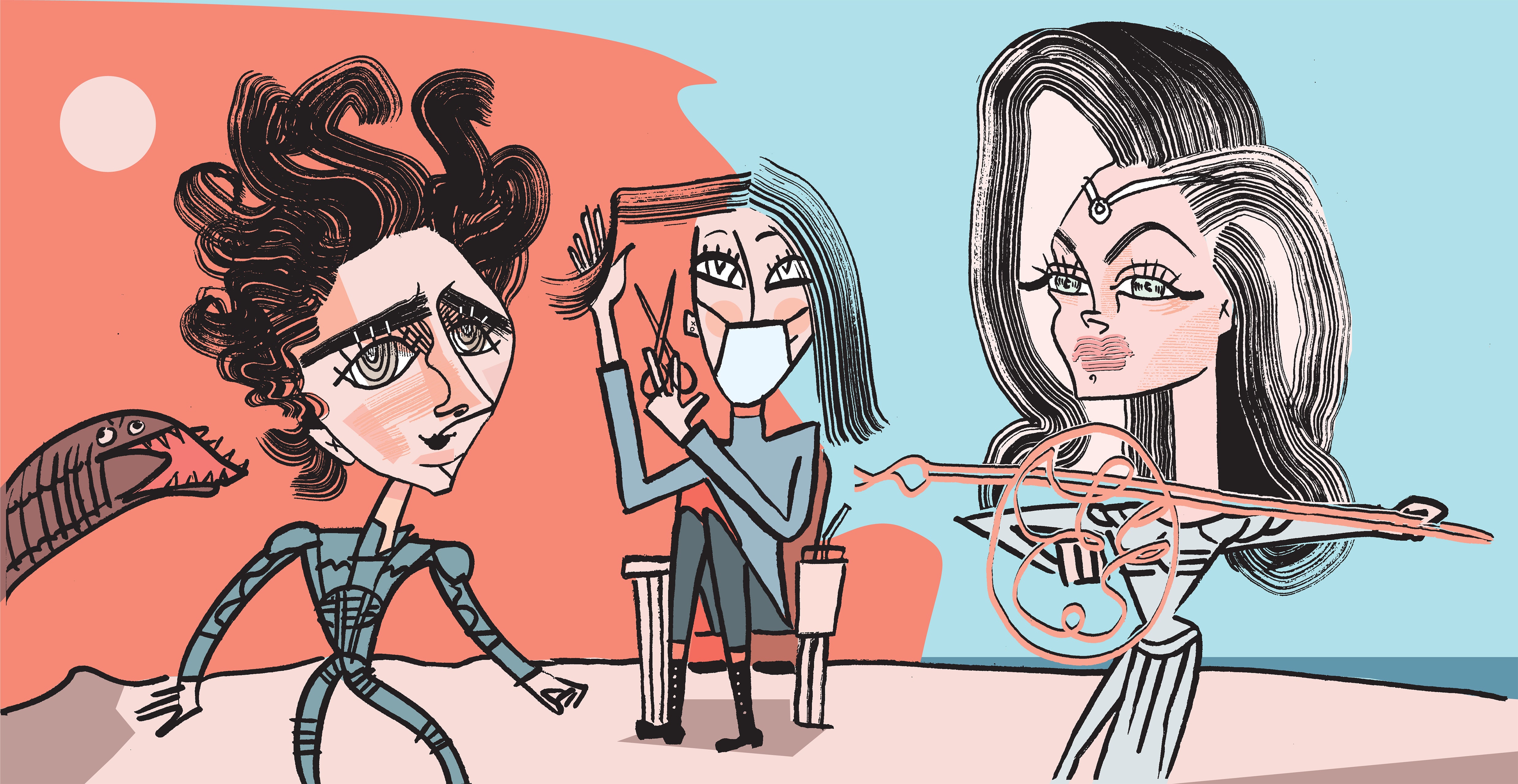 For many years, Libby Gelman-Waxner, an assistant buyer in juniors’ activewear, moonlighted for Premiere magazine and Entertainment Weekly as the world’s most beloved and irresponsible movie critic. Now she’s been coaxed out of retirement to make her mark in online criticism, at the urging of her close personal friend, the playwright and New Yorker contributor Paul Rudnick.

When it comes to superhero comics and multivolume sci-fi novels, I like to think of myself as a last responder, waiting for the movie version starring an A-list celebrity with a sparkly necklace on her forehead to play the grand high empress of another galaxy. So I was eager to see director Denis Villeneuve’s incarnation of “Dune”; all I remember from the 1984 David Lynch version was a nearly naked Sting wearing a codpiece that looked like a Chevrolet hood ornament. This latest “Dune” is spectacular, and I was so glad that I got to watch it on a huge, movie-theatre screen, because the stunning design combines elements of Frank Lloyd Wright, “Lawrence of Arabia,” and a Restoration Hardware catalogue.

The story follows an unseen emperor who sadistically swaps out ruling families on a planet that harvests a potent drug called spice; this of course made me think of an ad campaign for Old Spice with the Spice Girls singing about their spice racks. But “Dune” is serious, with an old-timey epic sweep, which is ultra-satisfying, like devouring a gallon of the best premium ice cream all by yourself because there’s still a pandemic. The movie stars Timothée Chalamet as a headstrong, young prince. Timothée’s been created from the most secret journals of tween girls everywhere—he’s beautiful without any sexual threat, with his soulful hair (tween heroin), yearning eyes, and the body mass of a poet action figure made from pipe cleaners. He’s Hamlet in agony over abandoning his boy band to pursue a solo career.

Timothée’s dad is a stalwart leader played by Oscar Isaac, who’s Timothée with more heft and a graduate degree in righteous decision-making. Timothée’s mom is Rebecca Ferguson, who’s slinky, mysterious, and possibly evil, much like myself. Timothée is being mentored to be a warrior by his buddy Jason Momoa, who could carry Timothée in his wallet like a vaccination card. Timothée’s clan has been appointed to rule Arrakis, which is mostly desert with an indigenous population called the Fremen, who are more than ready to teach Critical Fremen Theory in the tunnels to which they escape from the arid climate and the enormous, marauding sandworms, which resemble mutated vacuum-cleaner hoses that can suck up helicopters. Timothée’s family, the House Atreides, is being undermined by the wicked House Harkonnen, and I kept waiting for the House Chanel to step in with a hostile takeover, or for everyone to face off in a voguing contest, like on “Pose.”

“Dune” has a coherent plot, even if it’s only the first installment of some colossal saga, and its pounding score and stunningly choreographed armies deliver big-time cinematic thrills—a cross between fascist “Triumph of the Will” rallies and Busby Berkeley production numbers. I loved getting lost in a struggle that would never involve Brett Kavanaugh sobbing or tweets about a Texas school board protesting gravity. “Dune” demonstrates the difference between true filmmaking and those streaming movies set in the future which look like a bored kid’s coloring book, with the background C.G.I. barely sketched in. I also loved that the female characters were required to wear endless yards of billowing chiffon, which isn’t very practical but looks fabulous as these ladies stride across a tarmac to welcome a nefarious dignitary—they were clearly dressed by the House Isadora Duncan for a red carpet in outer space.

After sighing blissfully through “Dune,” I took in “Eternals,” which is equally glamorous—like the first Marvel franchise from Estée Lauder. It’s way more confusing and gimmicky than “Dune,” introducing a new roster of superheroes with blurry names like Ajak and Sersi, who have vague powers: there’s a woman who can sometimes turn solid objects into water or flower petals, and a guy who shoots lasers from his eyes to only partially destroy bloodthirsty monsters. Everyone’s a little part-time, as if they battle evil more as a hobby, on the weekends. The impressive cast has been assigned by some ancient being to almost bring peace to Earth, without interfering with humanity’s free will. The Eternals are like substitute teachers or distracted babysitters, not really keeping a close eye on things like World Wars.

The Eternals are led by Salma Hayek, who reminds me of my gorgeous Aunt Helene marching into Bloomingdale’s and demanding a discount for being a devoted lifetime customer; Salma always seems to be carrying an invisible Birkin bag. Salma’s cohort includes Richard Madden and Gemma Chan as not-very-flirty Eternals in love, who express their devotion by staring into each other’s eyes for long stretches, as if they were slot machines having sex. Angelina Jolie is Thena, a blonde warrior who can materialize weaponry, most of which looks like notebook doodles. The movie’s design sense is graceful and curlicue, with snarling creatures suggestive of the cluster of wiring tucked behind my flatscreen; it’s all very lightweight, as if the whole movie were some expensive, casual china pattern, with coördinated stemware and diaphanous table runners.

The Eternals spend a lot of their time outlining the past and tracking down wayward members, including the dreamy Kumail Nanjiani, who’s delicious as a vain Bollywood star, and a sullen teen-ager named Sprite, whose superpower seems to be pouting, maybe because her name is Sprite instead of Mountain Dew or Coke Zero. Sprite has a cowlick mop of Peter Pan-ish hair, for a nonbinary Chucky look. There’s half-hearted wrangling across the centuries and a mothership that resembles a granite countertop; even though the plot travels from ancient Mesopotamia to the present, every era veers toward Disney resort, with prefab temples, thatched huts, and an off-season water park.

“Eternals” was directed by the amazing Chloé Zhao, who won an Oscar for “Nomadland,” but it can’t make much sense of so many wispy characters defending earthlings whom we barely meet. Sometimes too much integrity can spoil the fun of a popcorn project. This is why my favorite TV show is currently “La Brea,” in which an enormous sinkhole opens up in downtown L.A., dropping buildings and Angelenos into another dimension ten thousand years in the past. The secret to “La Brea” ’s yumminess is that it’s set in California, so everyone in the alternate universe keeps checking their phones and getting miffed because there’s no Wi-Fi in the Stone Age. Something tumultuous happens every five seconds—including attacks by sabre-toothed tigers and the discovery of a village populated by an English-speaking tribe in fur vests and Flintstones jewelry—and someone is always shouting “Run!” or getting trapped in a cave made of Styrofoam. Cast members spend most of their time widening their eyes at the latest calamity, without ever messing up their prime-time-perfect hair or eye makeup; in an upcoming episode, I suspect, someone will race out of the jungle crying, “Hey, everybody! I found a Sephora!”

There are lots of approaches to fantasy material, and I’m keen on both the classic grandeur of “Dune” and the furrowed-brow insanity of “La Brea,” in which a husband who’s still above ground has supernatural visions of his wife and son in the Jurassic realm. He receives these visions by squinting slightly and then reporting what he’s seen to a lesbian scientist with access to a secret rescue helicopter. If I had to choose, I’d write a doctoral thesis on Timothée Chalamet’s cheekbones; liberate Angelina Jolie from “Eternals”; and drop a care package of vegan chili, Goop products, and MacBooks into the sinkhole in “La Brea,” if you ask me.

About Apple Business Essentials, I have questions

Pence Walks Out of “Hamilton” Again in Own Living Room

How to Support Your Friend Who Wants to Run a Marathon

Are You Social-Distancing, or Are You Colin from “The Secret Garden”?