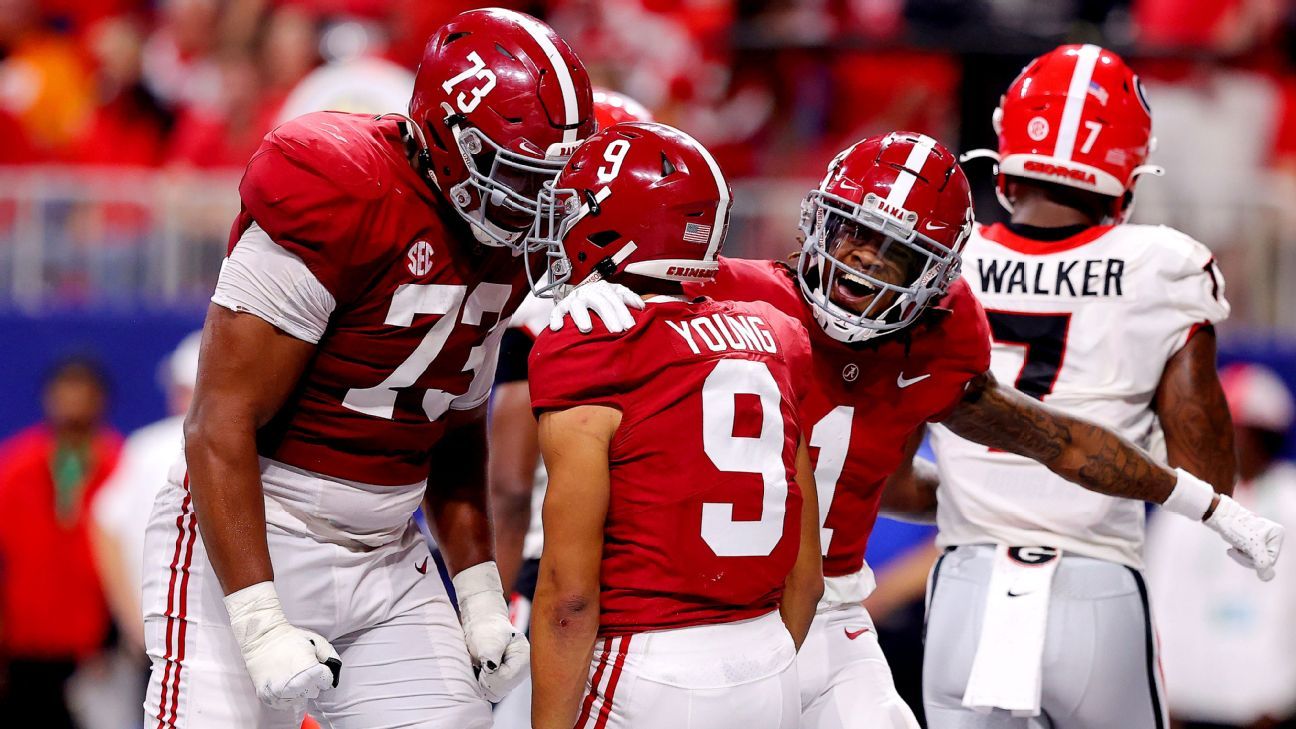 ATLANTA — Some things don’t change, as in Alabama‘s mastery of Georgia and the Crimson Tide spending yet another postseason in the College Football Playoff.

Sophomore quarterback Bryce Young threw three touchdown passes and rushed for another Saturday night to lead Alabama to a 41-24 beatdown of No. 1 Georgia in the SEC championship game at Mercedes-Benz Stadium.

Alabama (12-1) won for the seventh straight time over Georgia, with four of those wins coming right here in Atlanta either in the SEC championship game or national championship game. Nick Saban moved to 4-0 against his former assistant, Kirby Smart, whose Bulldogs never had any answers for Young and an Alabama offense that rolled up 536 total yards.

Georgia’s defense, stocked with future first-round NFL draft picks and considered by many to be one of the best in college football in recent years, had allowed a total of seven touchdowns in 44 quarters entering the game. But Alabama scored three touchdowns in the first half, and what was a 24-17 halftime lead grew to 38-17 early in the fourth quarter when safety Jordan Battle took back a Stetson Bennett interception 42 yards for a touchdown.

The SEC title was Alabama’s sixth in the past eight years, and the Crimson Tide will be heading back to the College Football Playoff for the seventh time in eight years, potentially as the No. 1 seed.

This was the first time Alabama had been an underdog in 92 straight games, dating back to a 38-10 win over Georgia in 2015.

It was Nick Saban’s eighth win over a No. 1-ranked team, the most by any coach in the AP poll era, which dates back to 1936.

As well as Young played, his offensive line was equally good. A week ago, Alabama struggled to protect Young in a 24-22 four-overtime win over Auburn, and he was sacked seven times. But against a Georgia defense that had been suffocating all season, Young repeatedly had clean pockets from which to throw the football.

And when he didn’t have a clean pocket, he scrambled around and made plays.

Alabama played the second half without one of its top receivers, John Metchie III, who suffered what Tide officials believe to be a torn ACL in his left knee in the first half and is expected to miss the College Football Playoff, sources told ESPN’s Mark Schlabach. But Jameson Williams shredded the Georgia secondary with seven catches for 184 yards and two touchdowns.

Bennett finished with 340 passing yards and three touchdowns, but was intercepted twice. Any chance the Dawgs had of mounting a comeback was snuffed out in the third quarter when they made two red-zone trips and came away with no points.

Georgia had not been in a close game all season, and it showed once the Dawgs fell behind Saturday. They were unable to come up with stops on defense, failed to finish key drives on offense and never figured out a way to slow down Young, who convincingly staked his claim to the Heisman Trophy.

As disappointing as the loss was for Georgia, the Dawgs will still be a part of the College Football Playoff. The official announcement will come Sunday night from the selection committee.

If Ben Roethlisberger retires, who’s the next Pittsburgh Steelers quarterback?

Brady will ‘definitely consider’ playing past 45